Mexico is often unfairly painted with the “it’s all dangerous” label.

It often surprises many tourists to learn that there are actually many safe destinations here too, that are visited annually with rarely any problems.

Having said that, there are still some places in Mexico that are pretty dangerous to visit regardless, and that’s what this article will focus on.

The Most Dangerous Places in Mexico

In fact, this guide explores some of the most dangerous cities in Mexico and aims to look at why each city has earned its place on this list.

To be able to gain confidence to travel to Mexico it will also look at the safety situation in the country to see if it’s improving or just getting worse.

Why are some parts of Mexico so Dangerous?

Firstly, it’s important to mention that when referring to the word “dangerous” in this particular article, I am actualy talking about people and not other risks such as rabid animals or any environmental risks.

Putting the usual Mexican stereotypes aside, the main reason some parts of Mexico are so dangerous is often due to the drug trade. There are many cartels that operate throughout Mexico, however, they tend to focus on certain areas (usually where drug production or consumption is highest).

Other reasons are because certain areas are poorer, more politically unstable, or just the general attitude of that particular place (for example not being tourist friendly or open to certain ethnic groups).

Is the Safety Situation improving?

As a whole, things are slowly but surely improving. Mexico has always been a very popular tourist destination, and as such the government are taking steps to ensure public safety is as high as possible.

Whilst many areas are slowly becoming safer (such as Chiapas and Mexico City), there are of course areas where such efforts still reap low rewards.

I’ll be taking a look at a few of these below, as these areas have a long way to go before we can consider them “tourist friendly” destinations.

10 Most Dangerous Places in Mexico

Now we’ll explore the 10 most dangerous places in Mexico. This article uses data gathered from Numbeo to compare each place, using different statistics such as levels of crime and assault to give a more clearer picture.

For reference, 100 is the most dangerous, whilst 0 is the safest.

To give a familiar comparison to the places mentioned below in this article, note that the city of New York scored 49.02 on Numbeo’s Crime Index.

This popular coastal city is a prime spot for beachside vacations, and is located in the northern state of Sinaloa.

Unfortunately, many parts of the city remain unsafe due to the large presence of drug cartels (Sinaloa is the epicentre of this trade in Mexico).

However, having said this, the local government and police have done a really good job in cleaning this up, which is evident from the statistics below. Mazatlán scored 43.48 on Numbeo’s Crime Index.

Cancún is one of the most popular places to visit in Mexico, which is located in the state of Quintana Roo. It’s quite dangerous in certain areas (although these are far from the touristy areas and resorts of the city).

Most violence in Cancún is due to drug-related activities, and anyone who willingly gets themselves involved (such as those who buy drugs). Cancún scored 56.25 on Numbeo’s Crime Index.

One of the biggest cities in the north of Mexico, Chihuahua is a popular place to visit due to its proximity to the Copper Canyon.

However, this city is dangerous as it’s known for cartel-related violence, as well as kidnapping (again these are mostly between factions and not targeted at the general population). Chihuahua City scored 56.25 on Numbeo’s Crime Index.

Now for a lesser known city. Ciudad Victoria is located in the northern state of Tamaulipas, which runs adjacent to the Gulf of Mexico.

Ciudad Victoria has earned its place on this list due to its problems with drug trafficking and shootouts between cartels. Much of this is also due to violence that occurs within prisons too, just to give more clarification. Ciudad Victoria scored 62.44 on Numbeo’s Crime Index.

Next we have Acapulco, which is a beachside city in the state of Guerrero. It’s a pretty popular holiday city for those heading to the Pacific Coast, where it also has a notorious nightlife scene.

Acapulco is dangerous as some cartels operate in the area, and also as theft and violent crime is more common (especially in the centre of the city). Acapulco scored 63.01 on Numbeo’s Crime Index.

Now we have another notorious city, which tends to make news on an international scale. Ciudad Juárez is located in the state of Chihuahua, and is another major crossing point into the USA.

The capital of Mexico is quite diverse. There are many parts which are safe and popular for tourism, however there’s also many barrios which are really not safe to visit.

Most violence here is either due to robbery or assault. Mexico City scored 68.52 on Numbeo’s Crime Index.

Now we head to Culiacán, which is the most notorious city in Mexico for the presence of drug cartels. It’s located in the northern state of Sinaloa.

Whilst the majority of violence here occurs between cartel members and the police force (who are in constant riffs), sometimes violence can be targeted towards civilians too. Culiacán scored 70.18 on Numbeo’s Crime Index.

Next up we have Tijuana, which is quite a popular vacation break that you’ve most likely already heard of. Located on the US border, in the state of Baja California, it’s one of the major crossing points into the USA.

This city is well known for its drugs trade, and subsequent related crime. Despite this, Tijuana still ranks as one of the most popular places to visit in Mexico. Tijuana scored 70.92 on Numbeo’s Crime Index.

Another lesser known city on our list, Celaya now officially ranks as the most dangerous city in Mexico, and one of the most dangerous cities in the world. Located in the usually safe state of Guanajuato, the high amount of violence here is due to the presence of the Santa Rosa de Lima cartel.

Since 2020, there have been countless shootouts between them and the local police as the government tries to put a stop to the drug trafficking trade. Celaya scored 81.98 on Numbeo’s Crime Index.

See these frequently asked questions about dangerous cities in Mexico:

What is the most violent state in Mexico?

Usually Baja California tops the list, however due to the on-going violence in Celaya, Guanajuato currently ranks as the most violent state in Mexico.

Is Tijuana the most dangerous city in the world?

Yes. As of April 2022, Tijuana currently ranks as the most dangerous city in the world, with 138 murders per 100,000 people. You can read more about safety in Tijuana on this blog.

How dangerous is Mexico right now?

As of 2022, Mexico as a whole is safe to visit, especially in the popular touristy areas such as the Riviera Maya, Oaxaca and Jalisco.

Where is most of the crime in Mexico?

The majority of crime occurs in states where there is a high presence of drug cartels. These include (but are not limited to) the states of Baja California, Tamaulipas, Sinaloa and Chihuahua.

Most Dangerous Places in Mexico

And that’s all for our guide on the most dangerous places in Mexico.

In general, Mexico is becoming a much safer place to visit for tourists. However, there’s still of course many places that are a complete no-go, for reasons varying from drug cartels to high amounts of theft or violence.

This guide has looked at some of the most dangerous places in Mexico, and why they rank so high. It has also looked at whether or not the safety situation in Mexico is improving so you can make up your mind.

Are you planning a trip or thinking of traveling to Mexico soon? See this comprehensive guide to safe cites in Mexico that you can visit. 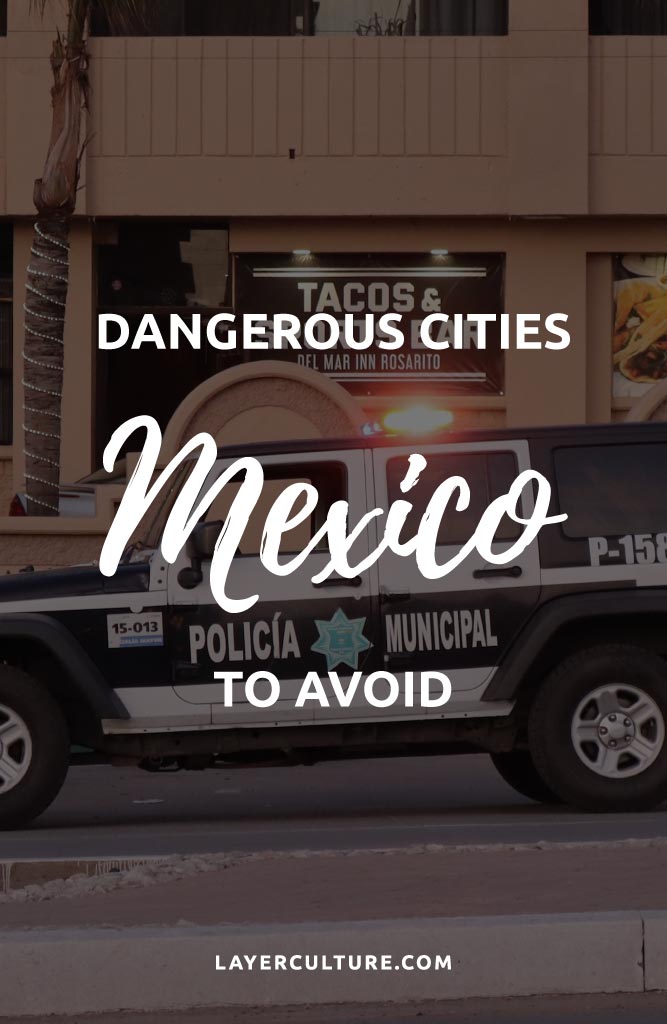 Did this help you discover the most dangerous places in Mexico?