You are here: Home / Mexico / Is Mazatlan Safe For Travelers?

Despite what they say, is Mazatlan safe or not for travelers?

Mazatlan is a Mexican town in the Sinaloa region. It has incredible beaches on the Pacific coastline and tourists travel here for its resorts.

Mazatlan has all the appeal of tourist-centric Mexican towns such as Puerto Vallarta, but with more history and culture when it comes to the Mesoamerican peoples.

This is where thousands of tourists flock in the summer to soak up some rays and have a relaxing time.

Mazatlan prides itself on its immaculate Mexican cuisine and traditions inherited from the Cáhitas such as ball games.

The landscape of the area, with an urban tinge to the rolling hills set behind the glorious coastline is best described as the reason thousands of people visit.

I invite you to see all the amazing things to do in Mazatlan for yourself.

However, most travelers are worried about its vicinity to the dangerous areas of Mexico.

Since Mexico itself is still ruled in a few areas by cartels, there are parts of Mexico that the US and UK governments advise never to travel to.

Sinaloa itself is home to the largest cartel in the western hemisphere, but this is in cities outside of Mazatlan.

Is it Safe to Travel to Mazatlan

It’s incredibly safe to travel to Mazatlan since thousands of tourists visit every year. The police in the area are clamping down on any petty or tourist-targeted crime in the area, so it’s very safe.

In the Golden zone, Old Town, or on the Malecon, it feels extremely safe. Visitors can even travel around these areas at night if they so wish, as they come to life at night.

One thing many travel professionals in the industry have had to deal with in recent years is the huge influx of fake news or misleading statistics regarding safety in Mexico.

This includes sensational headlines or crime reports that don’t provide the full context of the situation.

The irony of this is that most visitors to this region describe the area as safer than most American cities. You may even want to compare Mazatlan vs Puerto Vallarta to see the subtle differences.

The most dangerous risk when traveling to Mazatlan would be a simple petty crime that’s found in most countries.

It’s a touristy location to travel to, so the emphasis on safety and the upkeep of security is already better than in most of Mexico.

What must be mentioned before providing these harrowing statistics about the region, is that these are not for Mazatlan.

Mazatlan has little to no crime at all, especially with serious crimes such as homicide or terrorism.

The cartels don’t go near the touristy region, they mostly gather in Culiacan, which is a three-hour drive away.

Is Mazatlan Safe to Travel Alone?

Mazatlan is perfectly safe to travel to alone.

Use your common sense when taking excursions outside of resort hotel areas. Don’t expect complete safety during the late hours, and stick to the confines of tourist areas.

It would help if you knew some basic Spanish since Mexicans very much appreciate English speakers who learn it as a second language.

Booking excursions, hotels, and bus rides will be a lot easier if you did speak Spanish.

Backpacking across Mexico can be tricky since most of the bordering regions with other countries have a difficult reputation.

Consider staying at a hotel or one of the many top-rated hostels as a secure location when deciding where to stay in Mazatlan.

Mexico is an amazing country to navigate, but you definitely need to look up which regions should be avoided when backpacking.

It is suggested that backpackers who find themselves in Mazatlan wanting to travel north or south, find a coach service that can take you to Mexico City and travel around from that starting point.

Either that or if you’re moving south along the Pacific coast, make the trip to Puerto Vallarta.

This region of Mexico is quite safe, but it still smarts if you exercise the right precautions.

As with most places on the Gringo trail and beyond, remember not to take the touristy areas lightly just because there are other travelers.

Mazatlan is extremely welcoming, but almost to too many people!

The homelessness rate in Mazatlan is quite high, based on the number of Mexican citizens flocking here looking for work.

From to Puerto Vallarta From Mazatlan

Many travelers visit Mazatlan from Puerto Vallarta which is the travel epicentre of this side of Mexico.

You can take a bus that lasts approximately 7 hours and costs around $30. This is the cheapest and most cost-effective option, but it isn’t necessarily the safest. 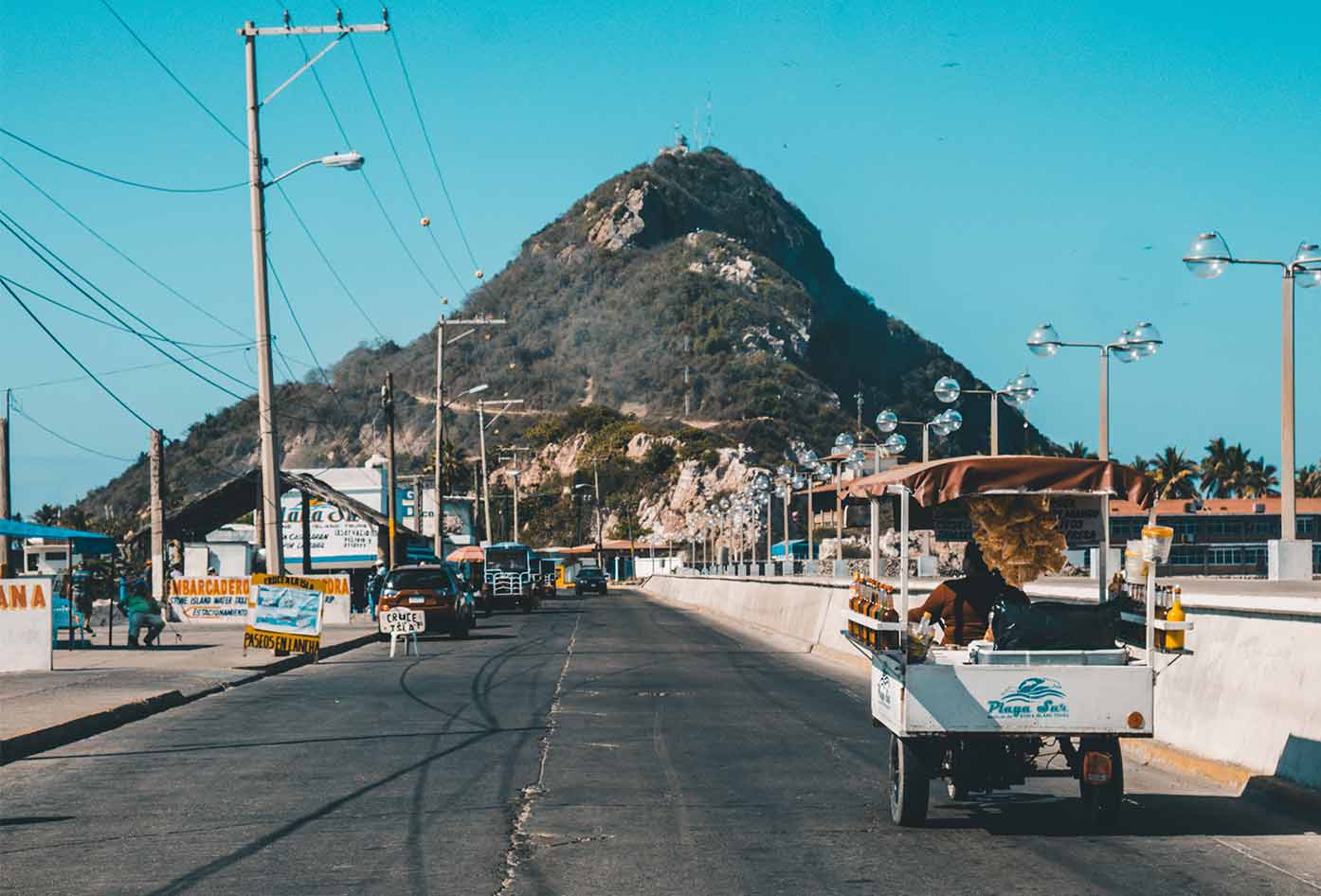 If you get an accredited taxi service that’s tried and trusted, the journey can be safer and as short as 5.5 hours. However, it will probably cost the equivalent of $160.

If you’re traveling as a part of five, however, this is around the same price per person as a coach.

However, it can work out cheaper to rent a car in Mazatlan when you bear in mind the freedom driving can offer you.

There have been a number of violent car-jackings and robberies along the Pacific Highway so be careful when traveling on this route.

Those traveling in large camper vans or sports utility vehicles (SUVs) have been targeted in the past.

If you have decided to rent a car and suspect you’re being followed or watched, drive to a police station or other safe place.

Be particularly alert on public transport, at airports, and in bus stations.

Theft on buses is common. Keep an eye on your belongings at all times!

If I was you, I’d take some notes of this comprehensive guide to bus travel in Mexico for a primer on Mexican bus systems.

Where possible, travel on first-class buses using toll roads, which have a lower rate of incidents than second and third-class buses traveling on the less secure free (‘libre’) roads.

Most first-class bus companies perform security checks when passengers board the bus.

Located along the Pacific coast, Mazatlán has both a clear dry and wet season which we’ll investigate below.

The dry season runs from late November until May and has daily average temperatures of 66-71°F. Highs can reach up to 84°F, with lows of 56°F (January and February are the coolest months to visit Mazatlán).

Rainfall is barely existent during this time of year, making it great to visit the beach. You can expect anywhere from 0.1-0.8 inches to fall throughout each of these (April is the driest month of the year).

The contrasting wet season runs from June until October, where daily averages rise to around 80-83°F. Highs can reach up to 90°F (July is the hottest month of the year), with lows of 72°F.

Rainfall gets progressively heavier the further into the summer we head, with 3-4 inches falling in June and July, 6-7 inches falling in August and September, and then a drop back down to around 3 inches for October. September is the wettest month of the year to visit Mazatlán.

Mazatlan is the spiritual and cultural home of a whole race of indigenous people that existed before the Spanish arrived. It has some of the best beaches, weather, and food in all of Mexico.

It truly is an underrated location in Mexico, so it almost seems untouched. It’s extremely safe with the police around at all times, but don’t venture out of the tourist spots.

Feeling inspired to travel to this part of north America already? See more of the safe places in Mexico you can visit whilst on your travels! 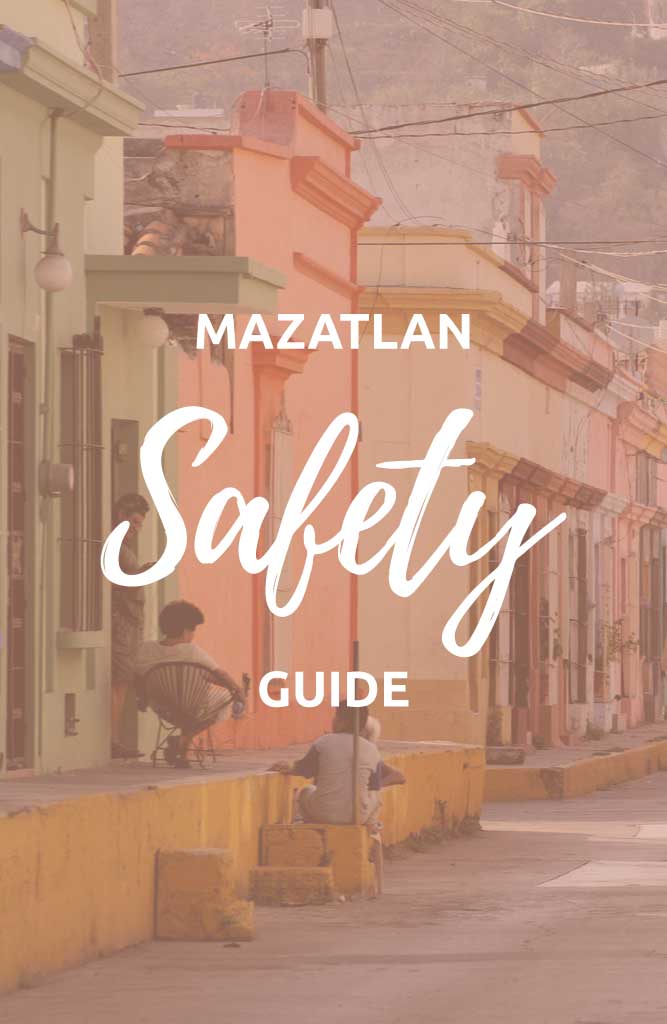 Have you got any tips about traveling to Mazatlan we can learn from?

This website uses cookies to improve your experience while you navigate through the website. Out of these, the cookies that are categorized as necessary are stored on your browser as they are essential for the working of basic functionalities of the website. We also use third-party cookies that help us analyze and understand how you use this website. These cookies will be stored in your browser only with your consent. You also have the option to opt-out of these cookies. But opting out of some of these cookies may affect your browsing experience.
Necessary Always Enabled
Necessary cookies are absolutely essential for the website to function properly. This category only includes cookies that ensures basic functionalities and security features of the website. These cookies do not store any personal information.
Non-necessary
Any cookies that may not be particularly necessary for the website to function and is used specifically to collect user personal data via analytics, ads, other embedded contents are termed as non-necessary cookies. It is mandatory to procure user consent prior to running these cookies on your website.
SAVE & ACCEPT
22 shares