Below we’re going to look at some of the many Mexican traditions.

When we think of Mexico, many concepts spring to mind.

The cuisine, the weather, the landscape, and most likely the culture.

Mexico spans thousands of kilometers with differing customs and specialties according to which state you find yourself in.

Many traditions of Mexico are unique to the country.

They feature a blend of native cultures such as Mayan as well as the Spanish/European traditions stemming from Catholicism.

No other place in the world has the Mexican style, that is, the culture and tradition that looks distinctly Mexican.

Below are some of the most distinct or interesting traditions celebrations in Mexico that you’ll find.

If you have ever been a victim of culture shock, hold onto your seat and buckle up for the ride!

There are many traditions deemed to be Mexican in origin, but can be found all over the world. That’s not only because Mexican culture carries with the locals when they travel.

It’s because Mexican traditions are so iconic and commercially successful, that they crop up all over the place.

You’ll see what we mean with one tradition in particular…

Independence Day is a national public holiday is celebrated all over Mexico. Everywhere shuts up shop for the day: schools, banks, and businesses close for the celebration.

It celebrates the day Miguel Hidalgo is believed to have made the cry of independence (El Grito de la Independencia) in the town of Dolores (a town in the north-central part of the Mexican state of Guanajuato).

Hidalgo, (not to be confused with the state of Hidalgo) among others, was one of the nation’s leaders during the War of Independence in Mexico.

The cry of Dolores (el Grito de Dolores), was made on September 15th, 1810 to motivate people to revolt against the Spanish.

Will you visit Guanajuato to pay respects? See this list of things to do in Guanajuato for inspirational activities to get involved with.

The Day of the Dead is a Mexican holiday celebrated and held on November 1st and 2nd. The national holiday gathers family and friends together to pray for and to remember those who have died.

It is commonly portrayed as a day of celebration rather than mourning, painting faces, and partaking in group festivities.

You may already be familiar with the famous skull designs and the Pixar movie COCO, which follows a young boy as he seeks the truth about his father on the Day of the Dead.

The annual celebration has become a national symbol and is taught in the nation’s school system, typically asserting a native origin.

In 2008, the tradition was added to the Representative List of the Intangible Cultural Heritage of Humanity by UNESCO.

What better place than Mexico’s capital to be for this event! See this guide on things to do in Mexico City for advice on what you can do.

The date is observed to commemorate the Mexican Army’s victory over the French Empire at the Battle of Puebla, on May 5, 1862.

The victory of the smaller Mexican force against a larger French force is a story of overcoming a seemingly impossible task.

A year after the battle, the French force defeated the Mexican army at the Second Battle of Puebla, and Mexico City fell to the invaders.

However, that first battle in which there was a glimmer of hope is an aspect of Mexican culture still prevalent today; with the first-ever Mexican heavyweight boxing champion Andy Ruiz Jr.

Will you be visiting this region soon? Discover these things to do in Puebla for ideas on what else you can do here.

A piñata is an animal-shaped container often made of papier-mâché, which is filled with candy and sweets. The piñata is suspended, often by a tree branch, and a child is given a blindfold and a stick.

The aim is to find the piñata without the ability to see. Then break it open with the stick or bat, releasing all the candy onto the ground.

The idea of breaking a container filled with treats from Europe in the 14th century. ‘Pignattas’ came from Italy, but it was the Spanish that brought the European commodity over the Atlantic.

Local records suggest the Mexican piñata tradition began in the town of Acolman. This is where piñatas were introduced for catechism.

Today, the Piñata is viewed as distinctly Mexican but can be seen worldwide. You can even buy a Piñata on Amazon for your party.

This one is not only part of the Mexican traditions and customs calendar. Mexican Catholics, and Catholics all over the world, celebrate Saint Cecilia as the patroness of musicians.

Mariachis (performers of traditional Mexican music) celebrate the feast day of Saint Cecilia (November 22nd every year) as their most important holiday.

On this day, they fill the streets of Mexico City and other major cities to celebrate the patron saint of music with festive songs.

Mariachi is a style of music and musical group performance that originated in the rural areas of Guadalajara in the 18th century.

It is believed to have developed from Andalusian music brought to Mexico by Spanish immigrants and influenced by indigenous music that already existed in some areas of Mexico.

Dance of the Parachicos in Chiapas

The dances of the Parachicos – the word refers to both the dancers and the dance – are considered a communal offering to these saints.

They start in the morning and conclude at night, as dancers carry wooden statues of saints throughout the city.

The experience is electrifying, as the dancers also play chinchines (maracas) throughout the whole ceremony. The whole experience is distinctly Chiapa, so you won’t find anything like it anywhere else.

With so much to do in this region where do you start? See this visitor’s guide om things to do in Chiapas for inspirational activities.

From December 16th to Christmas Eve, children often perform the ‘Posada’ processions or Posadas. This, in most English-speaking cultures, would be referred to as a nativity or nativity ‘scene.’ 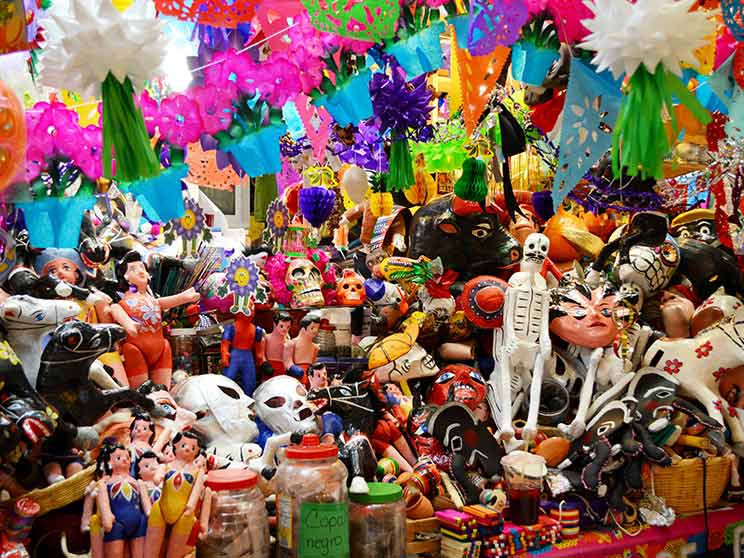 Posada is Spanish for Inn or Lodging, recognizing the search for a place to stay within the story that Joseph and Mary struggle with.

For the Posadas, the outside of houses lining the streets are decorated with evergreens, moss, and paper lanterns.

There are nine Posadas. In each Posada, children are given candles and a board, with painted clay figures of Mary and Joseph, to process round the streets with.

They call at the houses of friends and neighbors, in order to sing at each home. Imagine a blend of the nativity story and carol-singing.

An annual coming together of the Oaxacan communities in celebration of their cultural traditions and diversity.

The state of Oaxaca is home to sixteen different ethnolinguistic groups, almost a representation of the country itself.

Folk dancers and musicians costumed in their region’s traditional clothing perform song and dance, often to applause from locals.

Performers will often toss ceremonial items into the crowd, which could happen to you (if you’re lucky).

Will you be visiting this region soon? See these things to do in Oaxaca for ideas on what else you can get up to here.

Guelaguetza means “reciprocal exchanges of gifts and services” in the Zapotec language, and its cultural implications in the Oaxacan state extend beyond its literal meaning.

Traditionally, when there was an occasion for celebration in an Oaxacan village, the people attending would bring something to contribute: food, alcohol, supplies, or other expendable means.

The Danza de Los Voladores, known in English as the Papantla Flyers, is an ancient Mesoamerican ceremony/ritual still performed today.

Not often found everywhere in Mexico, it’s definitely a spectacle worth looking out for.

As far as Mexican customs and traditions go, this one is believed to have originated with the Nahua, Huastec, and Otomi peoples in central Mexico. Then spread throughout most of the Mesoamerican region.

Many travelers to Mexico looking for things to do in the Riviera Maya can encounter the Papantla flyers in Playa del Carmen.

The ritual consists of dance and the climbing of a 30-meter (98 ft 5 in) pole from which four of the five participants then launch themselves tied with ropes to descend to the ground.

This sounds insane, but it’s well worth seeing for yourself. The fifth remains on top of the pole, dancing and playing a flute and drum.

Feast of Our Lady of Guadalupe

Our Lady of Guadalupe is the Catholic title of the series of five Marian apparitions in December 1531, all of the Virgin Mary.

The apparitions were immortalized in the world-famous image enshrined within the Basilica of Our Lady of Guadalupe in CDMX.

Pope Leo XIII granted the image a decree of a canonical coronation on 8 February 1887, making it an officially Catholic memorial.

The Mexican novelist, Carlos Fuentes, once said “you cannot truly be considered a Mexican unless you believe in the Virgin of Guadalupe.”

Nobel Literature laureate Octavio Paz wrote in 1974 “The Mexican people, after more than two centuries of experiments and defeats, have faith only in the Virgin of Guadalupe and the National Lottery.”

The traditions of Mexico can be seen up and down the states and provinces.

From Tijuana to Cancun, Mexico isn’t just another Latin country.

Many visitors to Mexico can recognize an American, European, or native tinge to the traditions that make them evocative.

Visitors gasp at certain Mexican celebrations and traditions as being familiar, which isn’t surprising. The best way to learn about the traditions of Mexico however is to learn in person.

Many of these traditions don’t make complete sense until you’ve seen it for yourself in the flesh.

Read more interesting facts about Mexico on this blog and visit the country to be able to explore these traditions of your own volition. 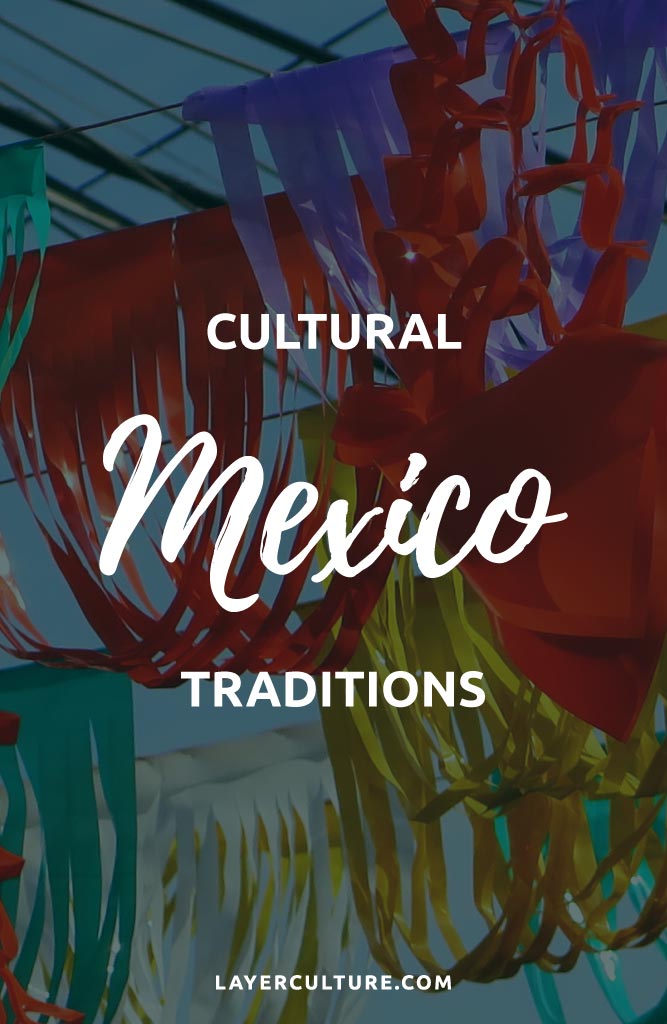 Did this help you with learning more about Mexican traditions?