In Colombia, what is a Paisa? And, what does it mean to be Paisa?

In most cases, I have found Paisas (the people from Medellin, Colombia) to be warm, kind, funny, and welcoming people.

While I was planning my trip to Colombia for the very first time, I had no idea about the paisa culture and how significant it actually is/was.

Not only in Colombia, but the ‘Paisa effect’ also has ripples in the rest of Latin America. In some cases, even in the world.

What is a Paisa?

In this guide we are going to answer the question, What is a Paisa?

Plus, I will go into more detail and even share what I have learned after spending many weeks in paisa land, also known as Antioquía.

So, let’s start with the short answer before we get into more detailed things to know about the Paisa culture.

A Paisa is anyone who is from the Antioquía region of Colombia. Contrary to what people may think they’re not defined by skin color.

According to the dedicated page on Wikipedia the word paisa derives from “Paisano,” which means a person from the same country.

Paisas have a very strong culture that is impossible to ignore, and they carry these cultural traits with them wherever they go.

What makes A Paisa different?

The Paisas in Medellin are very active and tend to live outside.

If you’re were planning a trip and wondering what to do in Medellin and/or really want to experience local life – you’ll want to know all this!

The lifestyle in Medellin for example compared to the life a the Paisas in the pueblos such as Santa Fe de Antioquía or Jardín varies alot.

I recommend you head over to places like Envigado, Sabaneta or even the Laureles neighborhood in Medellin and take a stroll around.

Laureles is an area popular with ex-pats in Colombia. Others who are considering moving to Medellin choose this area too.

Facts About The Paisa

Below are some facts about Colombia and some more which are more specific to the Pasia culture that you may not have known:

They’re also famous for other foods they eat such as the Arepa Paisa.

On any trip to Colombia, you quickly learn that the Arepa is one of the most versatile foods you can eat as part of a healthy diet in Colombia.

However, the Bandeja paisa is by far the most popular and some may even argue that the Bandeja Paisa is the national dish of Colombia.

Many of the paisa family names are from Spain, typically Basque families and as well as other surrounding provinces.

Whether considered “Antioqeñan” or “Paisa”, many of these families would have entered the port at Cartagena and migrated into the department of Antioquia.

Many of these families who are located in other coastal cities some of which are within the borders of the Antioquia region in Colombia such as Necoclí or Turbo.

As a cultural traveler in Latin America I thrive on learning all this so I’m able to understand people, and ‘the collective’ which is a must.

I live by the idea of not only meeting locals whilst traveling but the idea of speaking like a local to connect even further.

Maybe you just want to learn some basic Colombian slang words and phrases especially for your trip to Colombia?

After spending so much time practicing the basics of Spanish conversation, I have to put it into practice when in Latin America.

Once I arrive in Colombia one of my favorite activities, especially in Medellin has been spending time speaking with locals.

Doing this allows me to create a dictionary of words along the way.

Words and expressions I learned in the Antioquia region:

Other words heard in the Antioquia region I liked:

Out of all the Colombian accents I heard, my favorite accent has been that of Paisa. It is speedy but soft, and endearing.

In fact, out of all the Spanish accents I have encountered on my travels in Latin America – it has been my favorite.

See some of the Colombian slang words and phrases you’ll want to know to become even more acquainted with the Paisa culture.

Hopefully, with this short cultural guide, you have a better idea of what a paisa is in regards to Colombian culture.

Not only have we looked at what a Paisa is but also some of the words and expressions the Paisa’s say and some of the popular regions you may visit to get a deeper insight into the Paisa culture.

If you’re thinking about backpacking Colombia or traveling to learn Spanish – see my other guides dedicated to this magnificent country. 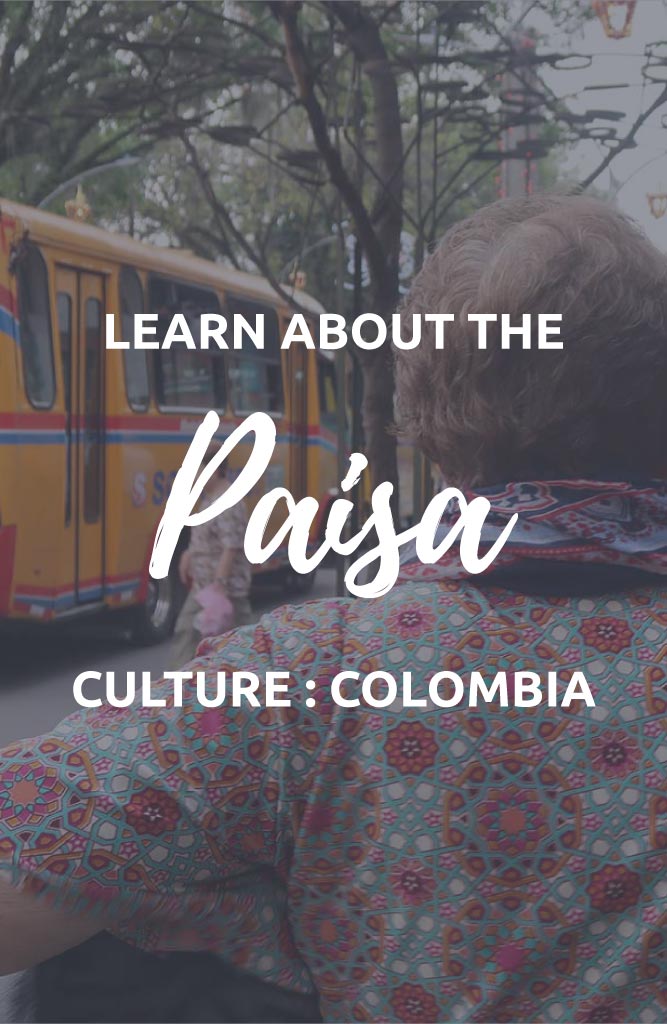 Did this answer you question to what is a Paisa?

This website uses cookies to improve your experience while you navigate through the website. Out of these, the cookies that are categorized as necessary are stored on your browser as they are essential for the working of basic functionalities of the website. We also use third-party cookies that help us analyze and understand how you use this website. These cookies will be stored in your browser only with your consent. You also have the option to opt-out of these cookies. But opting out of some of these cookies may affect your browsing experience.
Necessary Always Enabled
Necessary cookies are absolutely essential for the website to function properly. This category only includes cookies that ensures basic functionalities and security features of the website. These cookies do not store any personal information.
Non-necessary
Any cookies that may not be particularly necessary for the website to function and is used specifically to collect user personal data via analytics, ads, other embedded contents are termed as non-necessary cookies. It is mandatory to procure user consent prior to running these cookies on your website.
SAVE & ACCEPT
15 shares