So, you want to learn some cultural facts about Argentina?

The Land of Silver (Argentina) traces its name back to the voyages of the Spanish and Portuguese to the Rio de la Plata in the 16th Century.

Better known for its steak and wine as well as the Tango and football, Argentina has a unique blend of cultural ethnicities and expressions.

Argentina has the highest and lowest points in South America ranging from 105m below sea level to 6,960m above sea level.

If you’ve read any books about South America its no secret that Argentina has an ultra diverse population of inhabitants.

As well as native indigenous and African descendants.

During the 18th and 19th century the Afro Argentines made up almost 50% of the population.

I wrote about my experience of being black in South America after reading about the Afro Argentines and my encounters in the city.

A population that has since decreased due to many factors, including a nationwide whitening process which lead to an almost forgotten race.

Argentina’s architecture, music, dance, and other cultural expressions have their origins from across Europe.

I’ve compiled a list of unique fun facts about Argentina that will spark your curiosity and maybe even inspire you to travel here.

But, what is Argentina known for?

Not many people know that Mate in Argentina is super popular. Yerba Mate is a South American caffeine-infused drink.

Or, it could even those baked treats that get eaten by the dozen every morning called Medialunas.

Firstly let’s look at some general facts about Argentina:

The predominant language spoken in Argentina is Argentinian Spanish, which for many sounds more like Italian.

Buenos Aires is not only the most important city in Argentina, it’s the birthplace of the Rioplatense Spanish, known locally as Castellano.

One of the most well known Argentina facts that many people are aware of is that Argentina is home to one of the most influential and famous Latin dances of modern history, – The Tango!

There are some amazing facts about the tango dance that you may have not known. For instance, Tango was recognized as an Intangible Cultural Heritage contribution from Argentina and Uruguay on August 31st, 2009 by UNESCO.

The dance originated from lower-class districts of Buenos Aires and Montevideo along the Rio de la Plata in the late 19th century.

The term Tango and Tambo were originally used to describe musical gatherings of African slaves in the late 18th century.

Many tourists to Argentina visit especially to learn how to dance tango at one of the many dance schools in the capital.

After Argentina’s War of Independence from Spanish rule in the early 19th century Italian and French influences guided the construction of Argentina’s architecture.

Argentina plays host to many different architectural styles throughout the centuries from Baroque to Neoclassical and even Eclecticism.

Some famous architectural buildings in Argentina are:

The Cathedral of Cordoba is Argentina’s oldest church in continuous service in Argentina today.

It’s construction started around 1582 and completed in the late 18th century.

Other interesting facts about Argentina’s oldest church include:

This list wouldn’t be complete without some facts about Argentina’s food.

The National dish of Argentina is Asados (a variety of barbequed meat) grilled on a parilla (a large grill) that is packed with ribs, steak, chorizo, mollejas (sweetbread) chinchulines (chitterlings) and morcilla (blood sausage).

Asado was originally the main diet of the Gaucho (cowboy) that inhabited the area in and around the Rio de la Plata until the mid-19th century.

Today asado is a culinary cultural tradition among Argentinian families and close friends who gather typically on Sunday afternoons to enjoy each other’s company.

Another national dish you’ll find in Argentina is Locro, which is a hearty thick stew consisting of corn, beans, potato, some form of meat (usually beef, but sometimes beef jerky or chorizo) and vegetables.

It is often served on May 25th, the anniversary of the May Revolution in Argentina.

Locro is typically associated with native Andean civilizations and popular along with the Andes mountain range.

One of the cool things about Argentina is that if you’re an avid wine enthusiast, the country is renowned for producing exceptionally great wines.

Argentine writer Ernesto Sabato who wrote classic books such as The Tunnel and Angel of Darkness reflected on the nature of the culture of Argentina in his 1976 book “La cultura en la encrucjada nacional” as follows:

“With the primitive Hispanic American reality fractured in La Plata Basin due to immigration, its inhabitants have come to be somewhat dual with all the dangers but also with all the advantages of that condition because of our European roots, we deeply link the nation with the enduring values of the Old World; because of our condition of Americans we link ourselves to the rest of the continent, through the folklore of the interior and the old Castillian that unifies us, feeling somehow the vocation of the Patria Grande San Martin and Bolivar once imagined.”

You can find more classic books like On heroes and Tombs by Ernesto Sabato to read on Amazon.

The music of Argentina includes a variety of traditional, classical and popular genres.

As one of the largest South American countries, the culture of this land is rich with countless types of music.

Folk Music of Argentina comes in many forms developed in different regions with various European and indigenous influences.

Due to its large immigrant community (mainly from Europe) and diversity, most people living in Argentina will celebrate at least some of the unique cultural holidays, which include:

That Day of Respect on October 12th is not seen as one of the important facts about Argentina but I feel that it is a significate date for many Argentines.

It is also worth noting that during the past decade, Argentina’s street art or graffiti has become a popular cultural icon.

People are afraid to travel to Buenos Aires due to the safety issues but one of the great facts about Buenos Aires is that not only is it one of the biggest cities in Argentina, but it also has some amazing street art.

The city has become one of the best cities in the world to see huge murals that have been painted on the walls of buildings and houses.

In 2014 Buenos Aires Street Art partnered with Google Cultural Institute, which aims to document the world’s street art in a virtual library. The project features over 270 images from Buenos Aires.

The culture of Argentina varies widely across the different ethnic and immigrant groups that have settled there over the past 500 years.

In northern Argentina in places such as Salta, you’ll see the Llama in many places even at a crossing, contrary to what one would think, the Llama is not the national animal of Argentina.

Actually, the Rufous Hornero, which is named the Red Ovenbird in English is, in fact, the national bird and animal of Argentina.

Influenced mainly by European backgrounds such as German, Italian, Polish, Spanish and other regions as well as its native indigenous roots.

Much of Argentina’s music, architecture, writing, dance, social customs, and lifestyle is reflected by its European roots.

Argentina’s multiculturalism incorporates its history into the modern-day and is truly a spectacle to behold and experience.

Why not go deeper and learn more from these books about Argentina to get even more insight into the unique country and its people. 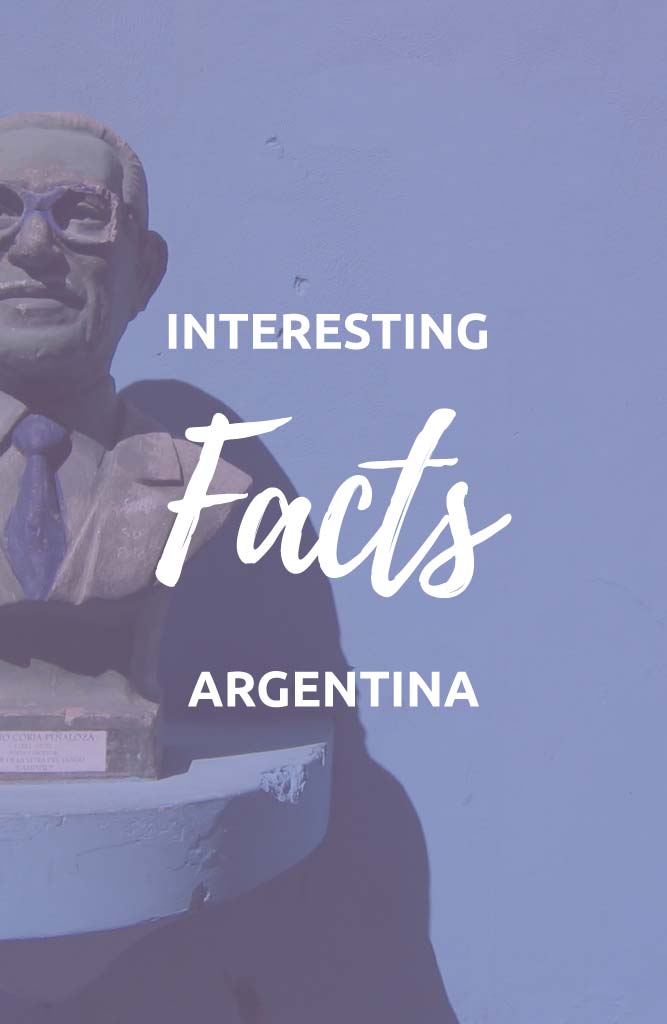 Did this help your search for interesting facts about Argentina?

This website uses cookies to improve your experience while you navigate through the website. Out of these, the cookies that are categorized as necessary are stored on your browser as they are essential for the working of basic functionalities of the website. We also use third-party cookies that help us analyze and understand how you use this website. These cookies will be stored in your browser only with your consent. You also have the option to opt-out of these cookies. But opting out of some of these cookies may affect your browsing experience.
Necessary Always Enabled
Necessary cookies are absolutely essential for the website to function properly. This category only includes cookies that ensures basic functionalities and security features of the website. These cookies do not store any personal information.
Non-necessary
Any cookies that may not be particularly necessary for the website to function and is used specifically to collect user personal data via analytics, ads, other embedded contents are termed as non-necessary cookies. It is mandatory to procure user consent prior to running these cookies on your website.
SAVE & ACCEPT
42 shares