You are here: Home / Learn Spanish / What does Parche mean?

What does parche mean when it comes to learning Spanish?

To continue my series on Colombian slang terms, we’ll discuss parche; what it means, its origins, and how you can use it in conversation.

Whether you’re learning Spanish or are preparing for a trip to South America, it’s very important to get familiar with popular slang terms!

What Does Parche Mean?

Origins of the Word “Parche”

It seems like the word “parche” comes from ancient French and it means sheepskin or leather.

In its origins, it was used to describe tanned leather or weathered skin, which was used to make drums and other percussion instruments.

The word “parche” from ancient French is derived from the Latin word “Parthica”, which referred to sheepskin, certain kinds of parchment paper, and also linen used to dress wounds.

Parche can be translated to patch, referring to the kind of material used to mend a hole.

However, we all know that slang terms have a meaning that’s very different from the literal one. Otherwise, they wouldn’t be as much fun.

In Colombia, the slang term “parche” refers to a group of friends who get together to do something fun.

It’s the kind of word you use to refer to your group of friends or to a fun plan, such as going to the beach, having a party, etc.

It can also be used to refer to someone cool or fun to be around. To help you understand better, here are a few examples!

Meaning in English: This place is really lame. Or This is a great spot!

Colloquial usage: In this context, parche is used as a synonym of “place” or “spot”, the place where you’re getting together with friends.

Meaning in English: Are we going to the mountain this weekend?

Meaning in English: Deal, I love that kind of thing.

Colloquial usage: In this context, parche is used as a synonym of “plan” that involves a group of friends and it’s something that’s expected to be very fun.

Meaning in English: Do you know María? She’s so cool.

Colloquial usage: This time, parche is an adjective that means someone or something is cool or great. It’s the same as saying “bacano” or chévere, which are also popular slang terms.

Meaning in English: I was with my buddies at the square.

Colloquial usage: In this context, parche simply refers to a group of friends, your buddies, your pals.

As you can see, the word “parche” can take on different meanings, but they’re all very easy to remember.

You will be able to use it in many contexts and you’ll hear it quite often, especially if you’re hanging out with a group of friends who enjoy doing things together, going out, and making plans. 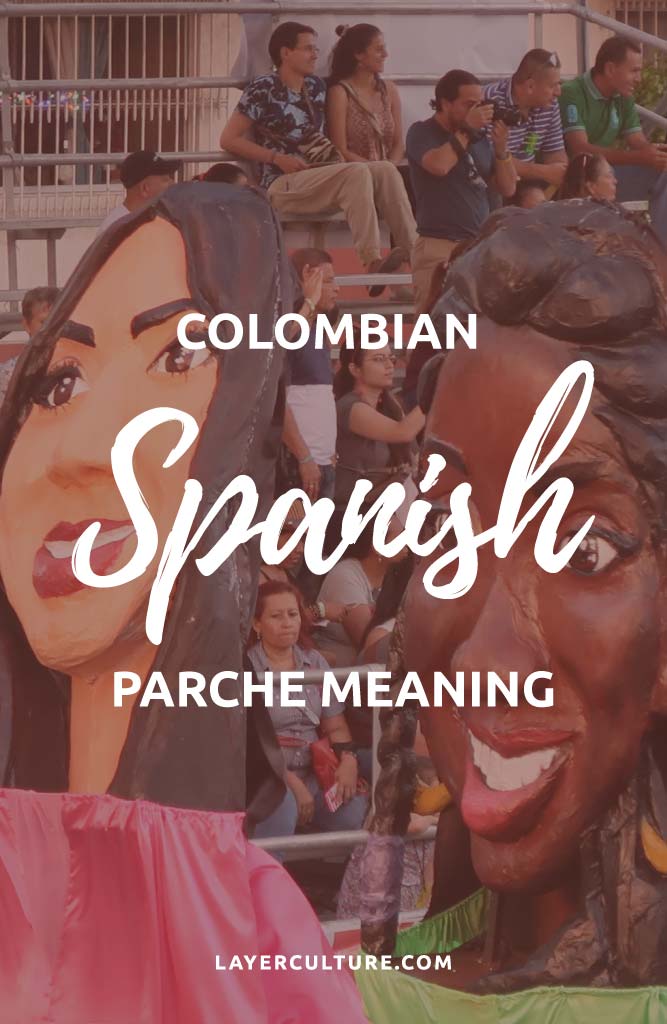 Did this help you learning more Colombian Spanish words?