Welcome to this article on the best Mexican food dishes.

It really is true when they say Mexican food is as varied as its territory. If you are planning a trip to Mexico then you’re in luck.

In this guide, we are going to look at some of the finest Mexican food dishes that any new traveler to the country should try.

One thing to remember is that Mexican food is not just Tacos and must not be confused with Tex-Mex which is a regional cuisine from the US.

It is difficult to describe Mexican food in one dish, and it’d take the most seasoned traveler years to explore the country’s culinary secrets.

When it comes to food in Mexico, there’s no shortage of diversity.

The quintessential taco becomes dozens of unique dishes, and that’s just the peak of the iceberg (or one spine in the cactus.)

Without further ado, here are 10 traditional Mexican dishes that any new visitor to Mexico should try at least once along their travels.

There are literally hundreds of different tacos in Mexico. No matter whether you are looking for ideas on what to do in Guanajuato or Guadalajara, you’ll find the taco sold on the street and in restaurants.

From chicken stew to breaded shrimp, and from grilled cactus leaves to sautéed zucchini blossoms, as long as it’s served over a tortilla, it’s a taco.

Amongst all tacos, the pastor, or shepherd’s taco, is king, particularly in the colossal capital city.

Picture marinated pork meat skewered and cooked over the open flame of a vertical broiler just to be shaved and served over a warm corn tortilla. They garnish it with diced onions, cilantro, and grilled pineapple.

The technique is similar to the Middle Eastern Kebab, and that’s no coincidence.

One of the many interesting facts about Mexico is how the Lebanese immigrants arrived and managed to adapt their cooking style to local ingredients and the pastor taco was born.

You might think French sauces are complex and sophisticated.

Still, they fall short against the myriad of Mexican mole sauces — some of them comprising over two dozen ingredients including nuts, fruit, chili peppers, and chocolate.

Perhaps the better-known mole is the ‘Poblano’ mole, which is commonly poured over chicken, sprinkled with sesame seeds, and served with a side of beans and rice.

This was one of my favorite foods whilst looking for things to do in Puebla on an empty stomach.

Although a specialty in the Mexican’s central plateau, all traditional restaurants nationwide will offer a rendition of this time-worn and labor-intensive sauce.

Hot peppers are native to Mexico, and they have changed the global food scene forever. From Thai melon salads to the Italian arrabbiata, hot peppers are one of Mexico’s greatest gifts to gastronomy.

Mexican spicy sauces, or ‘salsas,’ are ubiquitous, (whether it be homemade or Melinda’s) but there’s more than one way of enjoying the fiery pods.

Stuffed chili peppers exist in all shapes and sizes. The most famous is the fist-sized Poblano peppers stuffed with seasoned minced meat.

The ‘chile relleno’ is a delight, and if deveined and cleaned correctly, it’s not as spicy as you would imagine.

So what other must-try food in Mexico should you be on the lookout for?

Let’s keep on going down the list so you get even more ideas:

The cooking begins the night before as cooks season a whole pig and slow-cook it overnight for the most tender and juiciest pork meat you’ll ever try. If you’re traveling to Mexico city be sure to look out for it.

Served over a freshly made corn tortilla and dressed with cilantro and minced onions, this is the country’s dearest morning taco.

Nothing goes to waste, so you can order anything from pigs’ ear to tripe, but if you’re not that adventurous, there’s always the lean meat. Just request a ‘macisa’ taco, and you’ll be safe.

Enchiladas are the fork and knife version of tacos. Fried tortillas stuffed with anything from scrambled eggs to shredded chicken are tightly rolled and tucked, only to be bathed in a flavorful salsa.

More often than not, it’s the sauce rather than the filling that gives enchiladas their names.

Tomato enchiladas are bathed in tomato sauce, and a thick bean sauce makes bean enchiladas. The combinations are endless.

This southern specialty of Mayan inspiration is a popular Sunday meal around the Yucatan Peninsula.

They’ll then tuck the meat in banana leaves before slow-cooking it inside ground pit ovens.

The result is fork-tender brightly colored meat that melts in your mouth. Popular in the Yucatan, it is said that El Turix a home-style restaurant in Mexico City serves one of the best Cochinita Pibil.

Served over corn tortillas and garnished with habanero and citrus-marinated onions, few other dishes are as tasty in the country.

In Mexico, it’s not hard to find fish, octopus, shrimp and even lobster served over a tortilla. Places such as Cabo San Lucas are great for this.

Baja-style, breaded fish, or shrimp tacos are a northwestern specialty.

Topped with slaw, mayo, or a spicy sauce, these are some of the heartiest ways of enjoying fresh seafood. Don’t forget to drizzle them with lime!

See this guide on things to do in Baja California for more ideas on where to eat in the region.

Yes, ceviche is a Peruvian dish, but it is seamlessly entwined with Mexico’s coastal cuisine.

The Mexican ceviche looks nothing like its South American cousins.

Legend says that the secret behind a good ceviche is the addition of Fanta to the mixture. If you were thinking of visiting the Riviera Maya you’ll find the most delicious Mexican Ceviche in places such as Tulum.

Fish ceviche is the most popular, but shrimp, octopus, or mixed versions are equally available.

There’s beauty in simplicity, and there’s nothing more straightforward than Mexico’s favorite side dish, guacamole.

Interestingly enough, locals won’t only dip tortilla chips in guacamole, but they’ll also use it as a sauce to enhance their tacos’ flavor.

Guacamole might just be mashed avocados mixed with diced tomatoes, onions, hot peppers, coriander leaves, and drizzled with lime juice, but you just can’t miss it.

Particularly while enjoying a beer in a local bar or cantina.

Talking about cantinas, sautéed crickets are a popular Mexican snack.

Although you probably won’t find them in people’s homes, they’re a popular bar snack, mainly while enjoying a straight shot of mezcal.

Many travelers looking for cultural activites and things to do in Oaxaca visit the local market to try them there.

Crickets are not the only insect in Mexico’s pantry and don’t think for a second this is a recent trend. The alternative protein has been part of the country’s cuisine for hundreds of years.

This list of Mexican foods is merely just a drop in the ocean.

As you can see, Mexican food is not only varied but delicious! There’s something for every occasion and palate.

From street food two-biters to overwhelmingly complex sauces and concoctions, food alone is reason enough to visit the country.

The Mexican menu is as complicated as the most varied cuisines on earth.

Regional specialties, local produce found nowhere else, and centennial traditions make the country’s food a true journey into the unknown, and that’s the adventures we love, how about you?

See this guide to backpacking Mexico to learn more about where to go in Mexico and advice for planning your trip. 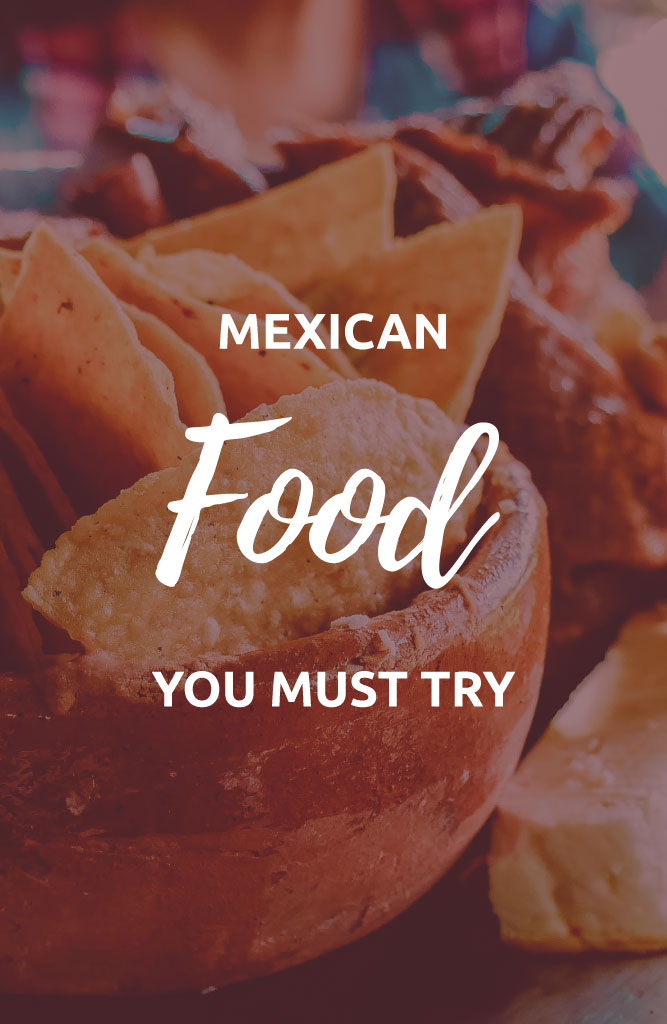 Have you tried any of these Mexican food dishes yet?

This website uses cookies to improve your experience while you navigate through the website. Out of these, the cookies that are categorized as necessary are stored on your browser as they are essential for the working of basic functionalities of the website. We also use third-party cookies that help us analyze and understand how you use this website. These cookies will be stored in your browser only with your consent. You also have the option to opt-out of these cookies. But opting out of some of these cookies may affect your browsing experience.
Necessary Always Enabled
Necessary cookies are absolutely essential for the website to function properly. This category only includes cookies that ensures basic functionalities and security features of the website. These cookies do not store any personal information.
Non-necessary
Any cookies that may not be particularly necessary for the website to function and is used specifically to collect user personal data via analytics, ads, other embedded contents are termed as non-necessary cookies. It is mandatory to procure user consent prior to running these cookies on your website.
SAVE & ACCEPT
255 shares