Latin American Spanish is beautiful, rich, and full of culture, which is why it’s worth learning.

If you’re thinking about learning Spanish, there are many reasons why you should consider going the Latin American way and today we’ll explore some of them.

In this article, we will also take a look at the differences between Latin American Spanish and Spain Spanish.

That way you can have a better understanding of it, choose the one that suits you best and finally start your language learning journey.

Learning Latin American Spanish is quite specific but I totally get it! Maybe your family is from Mexico or somewhere in Central America?

Or, maybe you’ve always wanted to go backpacking in South America and want to learn a bit of lingo before you go?

There are many good reasons to choose Latin American Spanish if you want to start learning a second language. Here are a few:

Before we get into the differences, let’s establish how each of these languages are labeled.

When we’re talking about Latin American countries, the language is simply called Spanish.

In Spain, the language is called Castilian (Castellano), and they do that to differentiate Spanish from other Spanish languages spoken in the country, such as Catalan, Galician, and Basque languages.

Let’s look at the differences between Spanish and Castilian:

Latin Americans used the formal ustedes for plural, while in Spain they use vosotros, which means the verb endings are different.

For example, in Spain you would ask,

But in Latin America it would be

Using the Latin American form in any Spanish conversation you may have will be understood everywhere, even in Spain.

There are many variations in vocabulary between Spanish and Castilian. The majority of words are universal, but some will be different in Latin American Spanish.

For example, in Latin America, you say “computadora” instead of “ordenador” (computer) or “celular” instead of “móvil” (cellphone).

Latin American Spanish is pronounced very differently from Spain Spanish. The pronunciation will vary from region to region, which is completely normal.

However, the biggest general difference between Latin American Spanish and Castilian is the lisp.

The Z is pronounced differently; In Latin America, they pronounce it as S, but in Spain, they use the TH sound, more specifically in Madrid, Barcelona, and other parts of Spain.

4. The Use of Past Tense

Another one of the biggest differences between Latin American Spanish and Spain Spanish is the use of past tense.

Spaniards talk about completed actions using the present perfect tense, while in Latin America they use the simple past.

So, a Spaniard would say:

and a Latin American would say:

(I went to the beach today).

So, Latin American Spanish is simpler and easier to learn in many different ways, including it’s a bit less complicated in terms of pronunciation and the use of past tense.

It’s still a challenge, but it’s a bit less work and you’ll still be understood everywhere.

There are so many ways to learn Latin American Spanish!

You can get a native tutor, use apps, read Spanish books or, jump into the deep end and travel to a Latin American country so you can learn the language first hand through experience and exposure to it.

If you want to learn Spanish in Latin America, there are many places to choose from as you can see when looking at the map!

The reality is, though, some locations are better than others in terms of language learning.

Whether that’s because the accent is easier to understand or the lessons tend to be less expensive, some destinations will offer more benefits for language learners.

See some of the best places to learn Spanish in Latin America:

Mexico is one of the best options for learning Latin American Spanish.

Not only is it rich in culture and tradition, but it also makes it very easy for foreigners to completely immerse in the language.

There are many safe places in Mexico despite what some may say.

Mexican people are friendly and graciously patient with language learners, so it won’t be difficult to make friends and practice what you learn.

Just keep in mind that Mexicans speak quickly, and though it may be daunting at first, it’s not a deal-breaker.

Guatemala is another great option for language learners because they have one of the tamest accents in Latin America.

They speak very cleanly, they take their time, and they don’t use slang too much, so it won’t be difficult to keep up.

Additionally, Spanish lessons are inexpensive and the country is full of amazing things to discover.

The culture is very rich and you’ll be able to explore this often over-looked gem. Both the tourist and the student in you will be very happy in Guatemala!

Not only is it a cheap place to learn Spanish in Latin America it’s a great entry point into Central America if you’re thinking about traveling.

Last but not least, Colombia is perhaps the most popular location to learn Spanish in Latin America.

Colombians speak Spanish with super clear pronunciation and it’s very distinctive, so much so that it’s considered to be the best Spanish in Latin America by many linguists.

Locals are also friendly and happy to share their language, and the country is a joy to explore. This is one of the reasons why I like Colombian Spanish and decided to focus on it more.

These are the top three locations language learners should consider when it comes to learning Spanish in Latin America.

They offer big advantages for beginners because the accent in these countries is not too strong, at least not compared to other places.

Think about Argentina for example, many beginners have trouble flowing the Porteño as endearing as Argentine Spanish is.

This is one of the reasons why it’s easy to immerse yourself culturally and soak up as much as possible in a place like Colombia.

Now, traveling is all well and good, but you can also learn Latin American Spanish online.

All you need to do is find the right resources to help you study and learn. And if you’re planning on traveling anyways, these resources will still be very helpful out there!

Here are some of the most powerful tools for language learners:

Duolingo is one of the world’s most popular language-learning tools.

This learning app is free and it offers courses for 11 different languages. One of the best things about Duolingo is how straightforward and simple it is.

When looking for new ways on becoming fluent in Spanish Duolingo is a great way to start the journey.

It works with modules and each module has several lessons you need to pass to move onto the next module.

Each lesson will have a variety of activities, including translation, matching vocabulary, listening exercises, and more. It’s a great way to learn vocabulary and grammar!

Pimsleur is a system that’s based on audio courses and these courses focus primarily on auditory and verbal perception.

With this method, you’ll be able to learn the structure of the language and each lesson will teach you new words and phrases, and it will also help you practice the things you’ve previously learned.

This is an amazing way to learn vocabulary; one level can teach you up to 300 words. The Pimsleur method can be challenging, but that’s precisely why it’s so effective and it is made for complete beginners.

Last but not least, we have Quizlet, a web-based application that provides access to interactive tools and games that will help you master Latin American Spanish.

This tool works with flashcards that will allow you to memorize vocabulary, test yourself with fill-in-the-blank, matching, true or false, and multiple-choice tests, and more.

You can create your own study guide and make your own flashcards, or you can use the ones available.

Either way, this is an amazing resource that will help you soak up the language and cement your knowledge.

Like I mentioned before, these tools will come in handy whether you’re studying at home or learning Spanish in Latin America. They’re a great complement for lessons and a great way to learn on the go!

Latin American Spanish is worth learning not only because it’s one of the most spoken languages in the world, but also because it’s beautiful, it’s rich, and it can be easier to learn than Spain Spanish.

Though it will still be challenging, as all new languages are, it’s a bit less complicated and it opens many more doors.

Whether you plan on traveling to immerse yourself or you want to learn from home, Latin American Spanish is the best alternative!

See these amazing tips for learning Spanish faster to get ideas on how you can get a head start on your road to Spanish fluency. 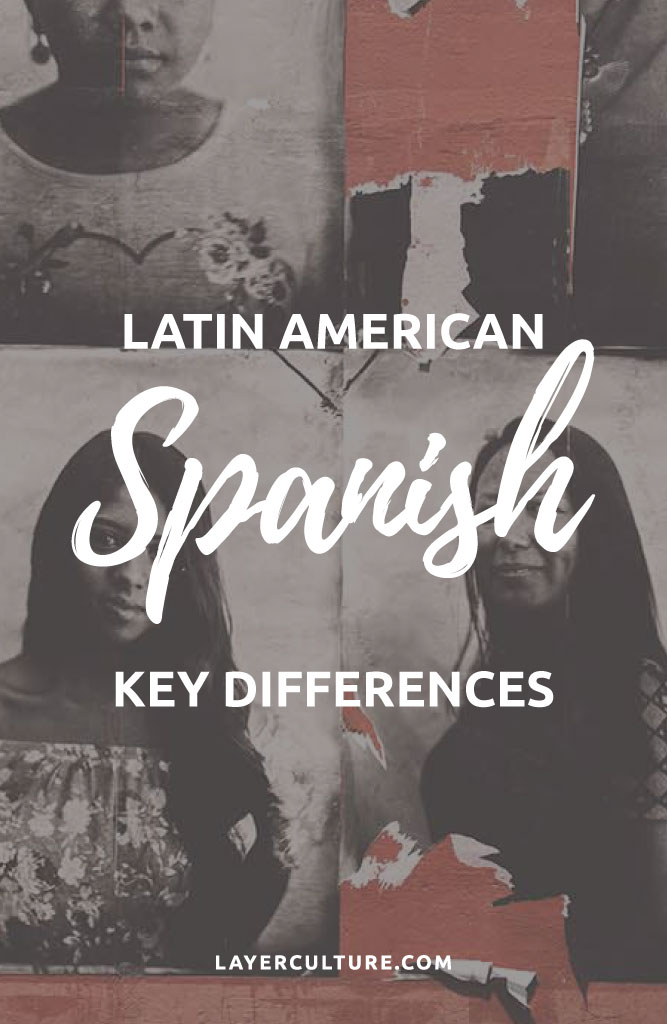 Did you understand the key differences with Latin American Spanish?