Were you asking the question: is Nicaragua safe to travel to?

Nicaragua is one of the most beautiful countries in Central America and the world and is somewhat of an undiscovered gem to this day.

Like a Caribbean island bolted on to Central America, this Latin country has some of the best lakes in the area.

Backpackers have flocked to the clear waters, white sands, and chilled environment for a while now.

However, Nicaragua has its hidden flaws and some interesting recent developments. As a socialist country, it has its strengths and weaknesses when it comes to safety.

That’s all great for the traveler looking for the right spots. But when it comes to traveling to a country like Nicaragua, you’re most likely there to pass through.

Nicaragua is in the perfect location for backpacking Central America and it’s easy to see why so many people pass through rather than stay. Is it safe to independently travel to Nicaragua?

Is it Safe to Travel to Nicaragua?

For most tourists traveling in Central American countries, there are a couple of things worth knowing before making the trip.

Nicaragua, as well as its neighbors, are infamous for crime rates.

However, this is mostly due to gang violence and petty crime carried out by gang members.

Gang activity has decreased in Nicaragua specifically, but that doesn’t mean it has stopped existing.

Poverty can be an issue, but the main issue that travelers must know is quite simple.

There have been reports of tourist targeting. That’s to say, crime has been specifically targeting travelers rather than locals to the country.

Tourists can be targeted if they carry expensive clothes, jewelry, and equipment on show.

This applies to most of Central America though, so there’s not a lot of difference in comparison with the likes of El Salvador and Nicaragua.

But it’s still something to keep in mind when traveling.

If you stick to this guide, as well as others online, you can make your trip as safe as you want it to be.

When traveling to Nicaragua stick to the normal travel/backpacking routes, places like Leon, Granada, and Ometepe island are favorites.

Is Nicaragua Safe to Travel Alone?

Nicaragua is safe as long as you stick to trusted modes of transport and hotels/hostels.

If you’re traveling alone, this may be to your advantage if you don’t look like a tourist.

For the most part, as long as you stay indoors at night and keep a watchful eye out for petty crime, you’ll be safe.

If you’re wondering about the safety of hostels, they’re very safe.

The best part about Nicaragua is the prices of rooms in hostels and hotels. For example you can stay in one of Granada’s luxury hotels such as Casa de Arcos for just a fraction of the price you’d pay in Costa Rica.

Taxis can appear to be quite expensive when compared with bus prices but at least the hostels are still cheap.

With places such as Volcano Maderas and the endless beauty on Ometpe island, Nicaragua is great for the backpacker.

The country is is so strategically placed, backpackers love it! If you use secure coach services and prefer not to fly, Nicaragua checks the boxes.

Nicaragua is great for bus-hopping since the landscape is quite hilly and full of bodies of water.

Make sure you make it to the coast too, the beaches are incredible. See this guide to backpacking Nicaragua for more.

⤵️ Here are some useful tips to help you on your trip:

See this guide to the safest countries in Central America for more practical safety information that may inform your latest travel plans.

Getting Around Nicaragua by Bus

The best way for you to get around Nicaragua would be through a trusted and secure coach service.

There are multiple bus tours that span the country, aiming at tourist attractions and beach areas.

The chicken buses in Nicaragua are some of the best in Central America, but the bus tours are specifically for tourists and can help you on your way to the next country if you’re touring Latin America.

Traveling alone, on a public bus, or trying a taxi could be dangerous. It would be best to stick with a coach.

Got Travel Insurance for Nicaragua?

Nicaragua is an amazing country with the best people and the best culture.

It’s perfect for the passing backpacker, so give it a try.

You won’t regret it!

Learn more from these books about Nicaragua to get even more insight into the country and its people. 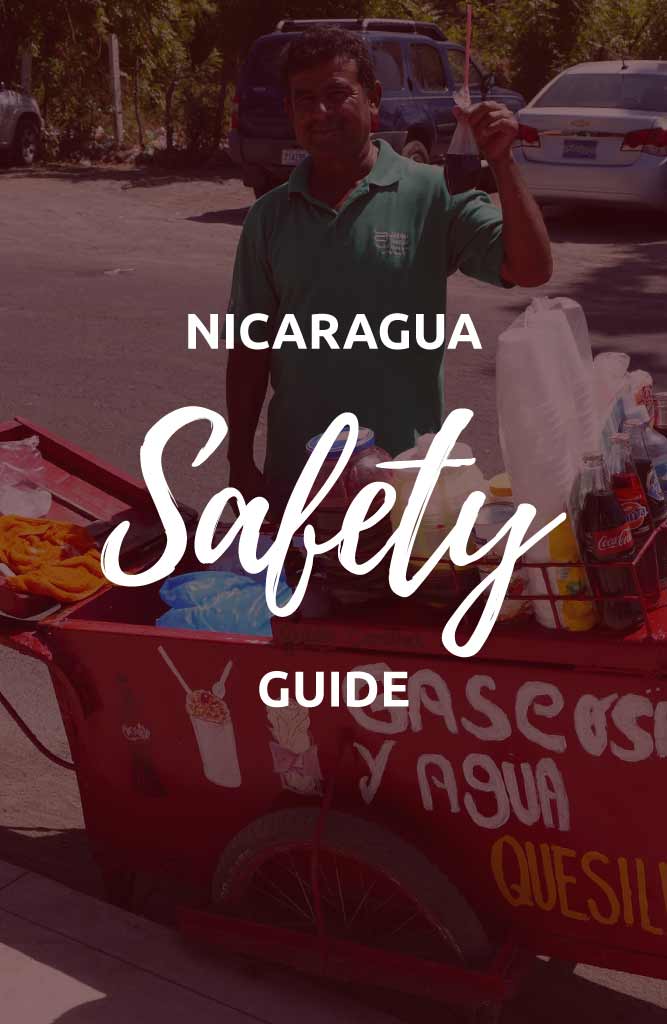