Read these interesting facts about Uruguay you may not have known.

Let me know in the comments how many of these facts about Uruguay you knew or if you have any fun facts to share.

Firstly, two very intriguing facts about Uruguay are that 95% of the country has access to electricity and a high literacy rate, making this one of the most sophisticated countries in South America.

Uruguay has a rich and diverse cultural heritage of music, dance, architecture, literature, and art spanning over centuries.

From the Indigenous Charrua tribes, colonial settlements ranging from the 16th – 19th century, to present-day Uruguay.

With its primarily homogenous European population, much of the original Indigenous people have been culturally assimilated.

The main influences of Uruguay’s culture are from Spain and Portugal, due in large part to these two European countries fighting for ownership.

Uruguay gained its Independence from Portugal on August 25th, 1825.

Here are some quick general facts about Uruguay.

Having been ruled over by dictatorships after gaining independence, Uruguay today is a free democratic republic.

How big is Uruguay?

The area of Uruguay is 176,215 sq km which is around 4 times smaller than Texas in the United States.

Facts about the Uruguayan People

Uruguay has the smallest Indigenous ethnic population in South America.

Roughly 88% of Uruguay’s population is of Italian or Spanish descent. This is due in large part to the countries traditional model of cultural assimilation.

Today, less than 2.5% of the population is of Indigenous ancestry.

A majority of Uruguay’s cultural expressions, such as language, cuisine, and literature, have been significantly influenced by its European origins.

Uruguayan people have access to free education. In 2017 Uruguay had a literacy rate of 98.6%, the highest in South America.

Uruguay was one of the first countries in the world to provides its public school children with a free laptop and wifi access.

As one of the most non-religious countries in South America, Uruguay has even renamed many traditional holidays, such as Christmas.

Together, the Uruguayan people form a progressive society.

Facts about Uruguay’s Music and Dance

An interesting fact about Uruguay is that Candombe is at the heart and soul of Uruguay’s musical dance culture.

Candombe originated in the 18th century among African slaves. During Uruguay’s fight for Independence from Argentina and Brazil.

The Uruguayan government and authorities sought to ban the dance until slavery was abolished in 1842.

Since then it has become a defining feature of Uruguay’s musical culture.

The African Candombe rhythms are produced by drums, typically as a set of three each a different size.

Candombe was recognized by UNESCO as an Intangible Cultural Heritage of Humanity.

Did you know Uruguay has the longest National Anthem in the World?

Initially, Greece held the distinction of having the longest national anthem with 158 verses, yet since adopting a shorter version.

Uruguay has held the record as having the longest national anthem at 150 bars of music and takes around 6 minutes to be sung.

To learn more about countries in Latin America, please read…

The music for the lyrics of Uruguay’s national anthem was officially recognized on July 25th, 1848.

The lyrics to Uruguay’s national anthem were written by Francisco Acuna.

Due to their semi-nomadic nature, many Indigenous groups didn’t focus on building permanent structures.

For the more settled groups, simple housing styles were constructed using materials from the surrounding land.

It wasn’t until the arrival of European settlers in the 16th century that the architectural styles began to evolve.

One of the best examples of colonial architecture is in the town of Colonia del Sacramento. Very little to no architecture from this period remains today.

The city was built by the Portuguese in 1680 and over several centuries has changed hands back and forth between Spain and Portugal through various wars.

The Barrio Historico was designated as a UNESCO World Heritage Site in 1995.

The Generation ’45 was a group of men and women from Uruguay whose literary works have had a profound influence within the region.

Some of the authors included were Mario Benedetti, who was a journalist, novelist, and poet. My favorite read by Mario is called The Truce and like much of his work, is well worth a read.

The term Generacion del ’45 derives from these authors all started their careers between 1945 – 1950.

It is said that the birth of Uruguayan literature took shape during the late 1700s. One of Uruguay’s first authors was a poet named Bartolome Hidalgo (1788 – 1822).

One of Hidalgo’s most significant cultural contributions was the initiation of the Gaucho literature, which was written using the language of the Gaucho.

Before the introduction of written literature, information, stories, and songs were passed down orally through generations of various Indigenous tribes within the region.

Uruguayan literature stretches back across centuries with a lively history.

Uruguayan cuisine is a unique blend of European recipes with a Mediterranean flair.

The Uruguayan cuisine has since captured the flavorful pallets of people from all around the world with such popular dishes as Asado, Capeletis a la Caruso, and Pasta Frola. Uruguayan cuisine is very similar to Argentinean cuisine.

One popular Uruguayan beverage in  South America is Mate. Yerba Mate is a traditional Uruguayan drink that consists of boiling water poured over dried Yerba Mate leaves. The drink Mate is commonly drunk with friends.

Other popular beverages are Clerico, which is wine mixed with fruit juice, is typically drunk around the end of year celebrations.

Uruguay hosts a vast array of alcoholic and non-alcoholic beverages. Grappamiel, a combination of alcohol, various grains, and honey. Grappamiel is popular among street musicians due to its strong alcohol content.

Uruguay’s cultural expressions of music, dance, and literature through experiencing a somewhat tumultuous past has shown resiliency throughout the 19th and 20th century with underground movements.

subsequently became mainstream and regained increasing popularity after the abolishment of slavery and military dictatorships.

Uruguay is the least religious country in South America, with 47% of the population identified as irreligious. 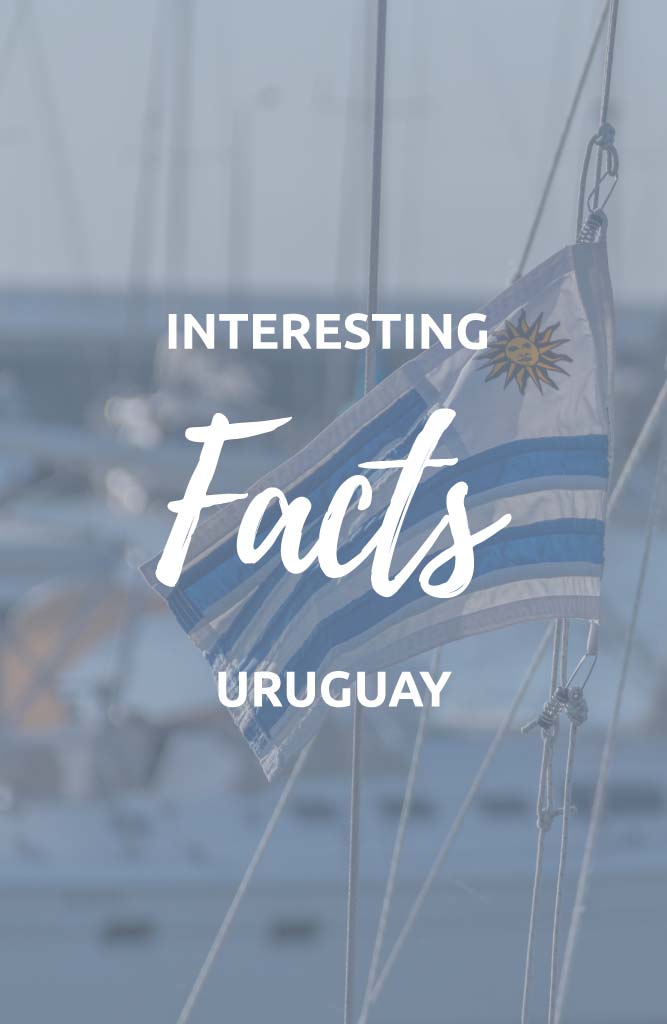 How many of these facts about Uruguay did you know?

This website uses cookies to improve your experience while you navigate through the website. Out of these, the cookies that are categorized as necessary are stored on your browser as they are essential for the working of basic functionalities of the website. We also use third-party cookies that help us analyze and understand how you use this website. These cookies will be stored in your browser only with your consent. You also have the option to opt-out of these cookies. But opting out of some of these cookies may affect your browsing experience.
Necessary Always Enabled
Necessary cookies are absolutely essential for the website to function properly. This category only includes cookies that ensures basic functionalities and security features of the website. These cookies do not store any personal information.
Non-necessary
Any cookies that may not be particularly necessary for the website to function and is used specifically to collect user personal data via analytics, ads, other embedded contents are termed as non-necessary cookies. It is mandatory to procure user consent prior to running these cookies on your website.
SAVE & ACCEPT
56 shares