Due to its geographical location, Paraguay is often referred to as Corazon de Sudamerica, which translates to Heart of South America.

Paraguay, like many of its South American neighbors, has experienced Spanish rule for several centuries following their arrival in the 1500s.

Gaining independence from Spain in 1811, the subsequent Geo-political challenges that followed contributed to Paraguay relinquishing much of its territory to neighboring countries.

One interesting fact about Paraguay is that the country borders with both Brazil and Argentina.

See these general facts about Paraguay below.

Despite experiencing oppression and censorship for several decades, the Paraguayan people have retained much of their cultural heritage.

Expressions of art, literature, and music have traditionally been passed down orally through generations.

Facts about the Paraguay’s people

Roughly 90% of Paraguay’s population is of Mestizo descent.

Paraguay is a bilingual country with Spanish as the second language and the Indigenous tongue of Guarani as its first.

The Guarani are an Indigenous group within Paraguay, and surrounding Bolivia, Argentina, and Brazil.

Considered onomatopoeic the Guarani language is said to mimic the sounds of nature and wildlife.

Despite its relatively small size Paraguay has 17 Indigenous ethnic groups.

Among its Indigenous ethnic groups are the Guarani, Ayoreo, Toba-Maskoy, and Sanapan, to name a few.

Paraguay’s population is one of the most homogeneous in South America with roughly 90% of Mestizo descent.

Influencing cultural expressions of language, music, and art, the Guarani are the dominant and most influential Indigenous group in Paraguay.

The Guarani language is spoken by more than 90% of the population.

The Harp and the Guitar are the most popular musical instruments found in Paraguay.

The Paraguayan harp is the national instrument of Paraguay and consists of 36 to 38 strings.

This harp was initially introduced to the Indigenous people in the 16th century by Jesuit priests.

Frequently used in church, the harp music was used instead of the organ. The Spanish guitar consists of 6 nylon strings.

The Paraguayan harp is known for producing captivating melodies.

When the Spanish arrived in Paraguay, they observed that the Indigenous Guarani didn’t have traditional music; however, they realized the Guarani possessed musical talent.

In the 19th century, Paraguayan polka was the primary musical genre, which drew upon European origins.

Interestingly, the juxtaposed nature of Paraguayan and European polkas has created unique musical expressions in Paraguay.

There are nearly 12 different variations of Polka in Paraguay.

Gabriel Casaccia is the father of modern-day Paraguayan literature and her literary works focused on modern realism and included 7 novels, 2 short stories, and 1 play.

Most of Casaccia’s novels focused on middle-class anti-heroes, who are dreamers.

A Paraguayan born in the countryside who moves to the city, but can’t get rid of his country habits is a prime example of a middle-class anti-hero in his 1952 novel La Babosa which is difficult book to get hold of.

During Casaccia’s first 17 years as a writer, he used the name Benigno Casaccia Bibolini. Paraguay’s early literary works were constrained.

Poverty, limited education, as well as the repression and censorship by dictator Stroessner, were the main factors contributing to Paraguay’s constrained literary history.

As an economically challenged country, many authors were forced to seek publishers in neighboring countries.

The literary works from Paraguay are written in Spanish sprinkled with Guarani phrases.

Paraguay’s Indigenous folk art is a vibrant mix of handicrafts.

Indigenous people native to Paraguay are known for their handcrafted ceramics, baskets, lacework, embroidery, and jewelry.

Perhaps the most popular form of Indigenous art is their featherwork and basket weaving.

Paraguayan featherwork was also incorporated into their clothing and accessories, some were for ceremonial purposes and others general.

Items such as headdresses, bracelets, collars, and cloaks worn by medicine men are some examples of Paraguayan featherwork attire.

Most Paraguayan handcrafts today are geared towards tourism. It is said that the prevalence of European handcrafts helped influence Paraguay’s lace-making.

Originating from Portugal and Spain in the 1700s, colonizers and missionaries taught the Indigenous people their lace weaving techniques.

European lace weaving was of a wheel-based design and often referred to as “ruedas.”

As their weaving techniques evolved, the Paraguayan people began incorporating palm leaf shapes into their design.

The city of Itaugua in Paraguay hosts a Nanduti festival each year in July.

Paraguay’s architecture remained vastly underdeveloped until the 18th century due to its lack of mineral resources.

Due to the semi-nomadic nature of the Indigenous Paraguayan people, many buildings were constructed of wood.

During the 1800s Spanish colonial architecture began to take root with a majority of the buildings in Asuncion and surrounding areas.

The Pantheon was initially built as a chapel, and subsequently became the Pantheon of Heroes after leaders, war heroes, and unknown soldiers were buried there.

It also serves as a reminder about the ravages of war on society and culture.

In fact, the Pantheon is where people pay homage to the fallen heroes of Paraguay’s two great wars.

In spite of its turbulent past, Paraguay has produced impressive architecture, great authors, unique music, and authentic folk art.

The people of Paraguay have shown astounding resiliency in maintaining their cultural heritage after fighting two major wars, which saw nearly a 90% casualty rate.

Having been ruled over by several dictators over several decades, Paraguay is now a democratic republic.

So, do you feel like you’ve learned some interesting facts about Paraguay and its culture?

If you’re traveling to South America and concerned about safety in Paraguay read more information on this blog on what to look out for. 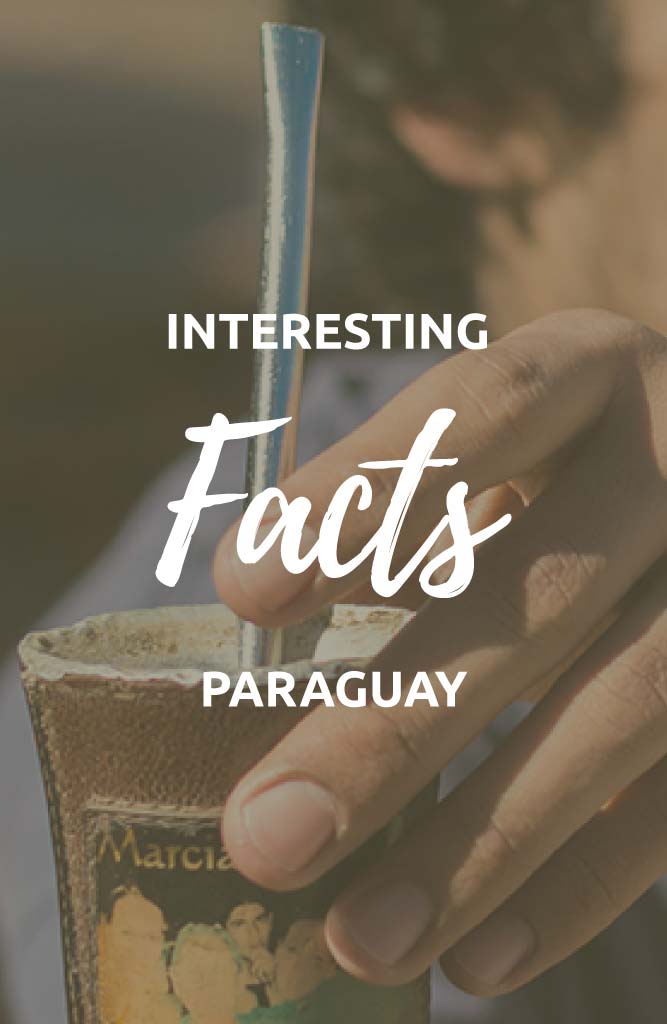 Did this help your search for interesting facts about Paraguay?

This website uses cookies to improve your experience while you navigate through the website. Out of these, the cookies that are categorized as necessary are stored on your browser as they are essential for the working of basic functionalities of the website. We also use third-party cookies that help us analyze and understand how you use this website. These cookies will be stored in your browser only with your consent. You also have the option to opt-out of these cookies. But opting out of some of these cookies may affect your browsing experience.
Necessary Always Enabled
Necessary cookies are absolutely essential for the website to function properly. This category only includes cookies that ensures basic functionalities and security features of the website. These cookies do not store any personal information.
Non-necessary
Any cookies that may not be particularly necessary for the website to function and is used specifically to collect user personal data via analytics, ads, other embedded contents are termed as non-necessary cookies. It is mandatory to procure user consent prior to running these cookies on your website.
SAVE & ACCEPT
65 shares