Eager to learn some interesting facts about Honduras?

There are two things that make Honduras genuinely unique among its Central American neighbors.

Honduras is said to have the largest wilderness area of all Central American countries and the second largest barrier reef in the world.

You’ll find many interesting facts about Honduras when you begin exploring its culture, people, and history.

For several thousand years, Indigenous ethnic groups have developed their cultures until the arrival of the Spanish colonizers in the 16th century.

The subsequent blending of European and Indigenous cultures and beliefs has led the Honduran peoples’ culture to develop into the unique artistic expressions we see today.

From festival celebrations that honor their Indigenous ancestors and deities to mouthwatering cuisine, Honduras is a land teeming with cultural traditions.

So, what is Honduras known for?

One of the most unique aspects about Honduras is that it’s predominately Roman Catholic, with 90% of its population being of Mestizo descent that relies heavily on agriculture.

Here are some fun facts about Honduras that may not have known:

The currency of Honduras has a level of significance as it is named after an Indian Chief who fought against the Spanish army.

Statistics show that Honduras is one of the poorest countries in Central America with 66% of the population in poverty.

Despite the extreme poverty, the Honduran people are incredibly proud of their culture and possess a strong work ethic.

Some other facts about Honduran people include:

There are also an estimated nine Indigenous ethnic groups in Honduras. Current estimates place the Indigenous population at about 1.3 million.

Many of these indigenous groups’ cultural contributions can still be experienced today.

The Garifuna gave us the Punta dance, the Mayans gave us magnificent architecture, and the Miskito gave us entrancing folktales passed down orally through generations.

Indigenous cultural customs can be seen in festivals, music, and art. Many people travel to Honduras to visit some of its cultural landmarks.

There are numerous cultural celebrations throughout the year in Honduras.

One such festival celebrates the Garifuna people and their culture.

The Garifuna are the descendants of Afro-indigenous people from the Caribbean who were exiled to the Honduran coast and island of Roatan in the 18th century.

The National Garifuna Festival celebrates their cultural heritage and is typically held during the third weekend in July.

Also, the Garifuna’s cultural contributions to Honduras also include music and cuisine.

One festival in Honduras to look for is the Feria Juniana, a month-long vibrant celebration in San Pedro Sula.

Despite fears of safety in Honduras, people attend anually during June for the festival of Feria Juniana in San Pedro Sula.

This festival honors the patron saint of the city, St. Peter the Apostle.

To learn more about countries in Latin America, please read…

During the celebrations, you can expect to experience live music, dancing, local cuisine, and even a parade. You’ll also see local artwork and magnificent firework exhibitions at night.

Feria Juniana is a popular event that draws in locals and tourists alike.

Amongst the Honduran peoples, Music is an integral aspect of Honduran culture and a way of life.

Honduran music is a diverse mixture of rhythmic sounds of Caribbean salsa, reggae, merengue, and reggaeton.

One of the important facts about Honduras to know is that all Hondurans love their music. They are also known for playing it loudly. Within the metropolitan areas, music is also played loudly, in cars, at shopping centers, and parks.

Music is an integral part of Honduran society. Punta is the most popular form of musical dance expression in Honduras.

Originating in the 18th century and heavily influenced by African elements, Punta music has become the primary musical genre throughout the country.

Banda Blanca is a Honduran musical group that helped launch its popularity. The lyrics of most Punta songs are written by women.

Punta can be performed on holidays, parties, ancestral celebrations, and social gatherings.

Honduras is recognized as a food priority country by the United Nations.

Despite its agricultural potential, the United Nations recognizes Honduras as a food priority due to its inefficient agricultural practices.

Honduras’s agriculture is best known for its export of bananas and coffee. Nearly 60% of the rural population is employed within the agricultural sector.

In 1999, Hurricane Mitch devastated the agricultural industry, and it has been slow to recover.

Currently, agriculture in Honduras accounts for roughly 14% of their GDP. Most rural Hondurans experience an agricultural lifestyle.

Since most of the rural population is employed in agriculture, they have a farming lifestyle.

Typically Hondurans will wake up early and take a nap in the middle of the day, which is usually the hottest time of day.

A vast majority of the rural farms are family-owned, and they number in the thousands.

Chiquita and Dole operate large plantations in the northern part of the country. Honduras has roughly 4 ½ million acres of arable land.

One of the many interesting things about Honduras and its cuisine is that many of the dishes are influenced by the countries natural resources.

One Honduran dish that is enjoyed throughout the country is Yucca with pork.

The dish consists of a pickled coleslaw added on top of the yucca, which is boiled and lightly salted.

Honduras has hundreds of traditional dishes that are popular throughout the world today. Honduran cuisine is influenced by its ancestors and immigrants.

A traditional Garifuna dish is Machuca, which is fried smashed plantains, finely chopped onion or garlic, and jalapenos with salt sprinkled on top. Pupusa is a staple food in Honduras.

A true authentic Honduran dish is the plato tipico, which consists of grilled pork and beef, cooked rice, fried plantains, and stewed beans with traditional chismol.

Much of the cuisine in Honduras combines African, European, and Indigenous ingredients.

Honduras means “depths” for its deep waters off the coast, it has a wealth of natural resources and cultural traditions.

Its local cuisine, musical expressions, breathtaking dive sites and festive celebrations have gained International popularity over the past several decades.

Despite being one of the poorest Central American countries economically. Honduras remains a rich cultural gem to be explored and experienced. 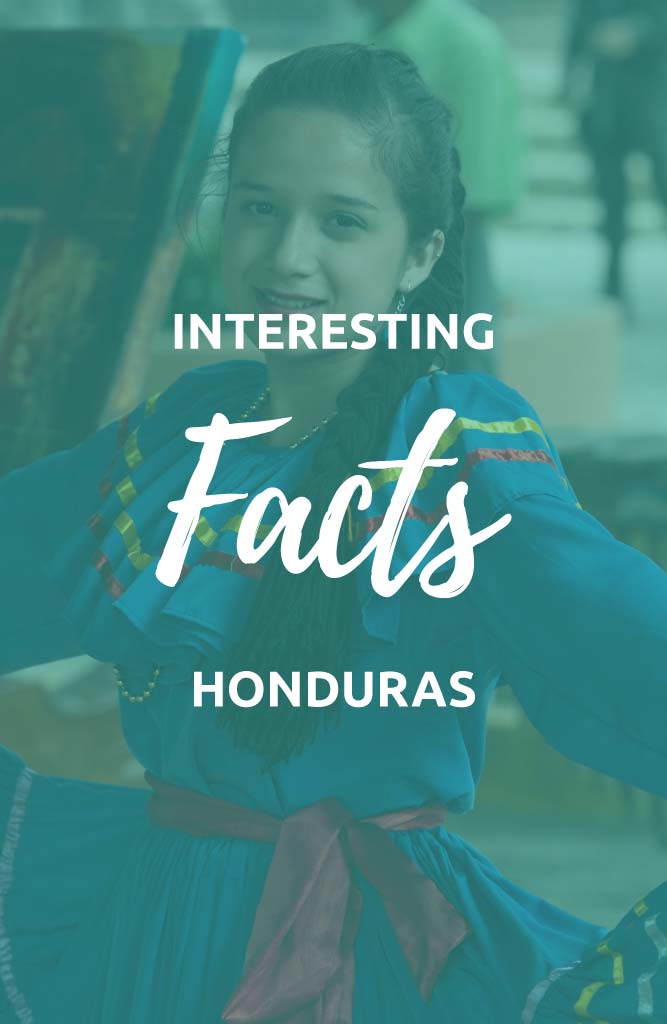 Did this help your search for interesting facts about Honduras?

This website uses cookies to improve your experience while you navigate through the website. Out of these, the cookies that are categorized as necessary are stored on your browser as they are essential for the working of basic functionalities of the website. We also use third-party cookies that help us analyze and understand how you use this website. These cookies will be stored in your browser only with your consent. You also have the option to opt-out of these cookies. But opting out of some of these cookies may affect your browsing experience.
Necessary Always Enabled
Necessary cookies are absolutely essential for the website to function properly. This category only includes cookies that ensures basic functionalities and security features of the website. These cookies do not store any personal information.
Non-necessary
Any cookies that may not be particularly necessary for the website to function and is used specifically to collect user personal data via analytics, ads, other embedded contents are termed as non-necessary cookies. It is mandatory to procure user consent prior to running these cookies on your website.
SAVE & ACCEPT
127 shares