Do you want to learn some interesting facts about Cuba?

As you may well already know, Cuban music is world-famous.

While salsa is perhaps the most famous and popular form of musical expression, let’s not forget about all the cigars and cars.

When visiting Cuba you’ll realize that the Cuban people are very resourceful. One reason for this is they take great pride in their culture.

Cuba’s rich history stretches back hundreds of years and is one of the reasons people from all over the world want to visit the island.

Cuba has a rich cultural background. From Cuban music that is known all over the world to the best cigars on the planet.

For nearly 400 years Cuba was under Spanish rule and gained formal Independence in 1902. The 1950’s witnessed the rise of Fidel Castro and communism.

Despite overwhelming odds and a lack of resources, the Cuban people have continued to thrive and develop their culture through adversity.

Baseball was introduced to Cuba in the 1860s by students returning from colleges in the United States and American sailors who ported in the country.

Also, Boxing a popular sport with Cubans originally arrived in Cuba as a tourist attraction.

Primarily as championship bouts between North American boxers during the high tourist season in Havana.

In 2012 Castro’s government made it possible for Cubans with passports to leave the island.

Many baseball players seized the opportunity to go to the United States to become professional players.

Cuba’s greatest amateur boxers Teofilo Stevenson won 3 Olympic Gold medals in (1972, 1976, and 1980) has made many contributions to Cuba and Cuban boxing and is known for his sportsmanship.

If you’re planning to visit Cuba soon, you’ll quickly learn about the many musical genres.

Among the most popular are Son Cubano, Salsa, and Rumba.

Son Cubano is a genre of music and dance that originated in the mid-19th century in the highlands of eastern Cuba.

Salsa is a popular dance music genre that first of all arose in New York City; in the late 1960s.

Salsa is a derivative of the Son Cubano musical genre. A fusion of Spanish Cancion and guitar, and above all the Afro-Cuban percussion which is merged with North American music styles such as jazz.

Cuba’s most famous singer Celia Cruz renowned internationally as the “Queen of Salsa” gained 23 gold albums during her career.

Celia Cruz was an ambassador for the variety and vitality of the music of her native Havana.

After the Cuban revolution, she became a symbol of artistic freedom for Cuban American exiles. Former U.S. President Bill Clinton awarded her the National Medal of Arts in 1994.

World-famous Salsa, a Latin dance that is the most popular form of dancing in Cuba.

Here are a few facts about Cuba’s dance culture:

Unlike some of the other Latin dance, genres Salsa is one of the most popular and well known amongst people today.

In the heart of Havana is Habana Vieja. Old Havana in English which was founded in 1519 by the Spanish Crown.

It is said that architecturally Old Havana is like no other cities in the Caribbean.

The Havana Cathedral is considered a gem of early Baroque architecture in Cuba.

The Cathedral was constructed between 1748 and 1777 out of blocks of coral from the Gulf of Mexico and the Caribbean.

In 1796, after the Peace of Basel was signed and Spain ceded most of Hispaniola to France, the remains of Columbus were moved and laid to rest in the Havana Cathedral’s Alter of the Gospel.

His remains got returned to Spain in 1898 after the Cuban Independence war.

Cuban literature is one of the most prolific, relevant and influential literature in Latin America and all the Spanish-speaking world.

Nicolas Guillen is known as the national poet of Cuba. Some of his accomplishments include:

Cuban art is an exceptionally diverse cultural blend of African, South American, European, and North American elements, reflecting the diverse and various ethnicities of the island.

In the 16th-century painters and sculptors began arriving from Europe to decorate Cuban churches and public buildings. By the mid-1700s, native-born artists working in the European tradition were active in Cuba.

The National Museum of Fine Arts in Havana Cuba exhibits Cuban art collections from the colonial times up to contemporary generations.

Roberto Fabelo is a widely known Cuban painter, illustrator, and sculptor. He’s probably one of the most respected premier artists from Cuba.

Today, Fabelo is best known for his captivating artworks. Most of which depict nude women with bird-like feathers.

The Cuban state awarded him a medal for National Culture and the Alejo Carpenter medal for his outstanding artistic career.

His work is exhibited at the Museo Nacional de Bellas Artes in Havana.

Above all, the culture of Cuba is a complex mixture of different, often contradicting, factors and influences.

The Cuban people and their customs are based on European, African and Amerindian influences.

Finally! One thing to always respect the Cuban people for is how proud they are of their culture and heritage. It is almost awe-inspiring.

This will become apparent when you visit Cuba and get to meet the local people who live there.

Hopefully, you have learned something new by reading this cultural facts series.

Learn more from these books about Cuba to get even more insight into the country and its people. 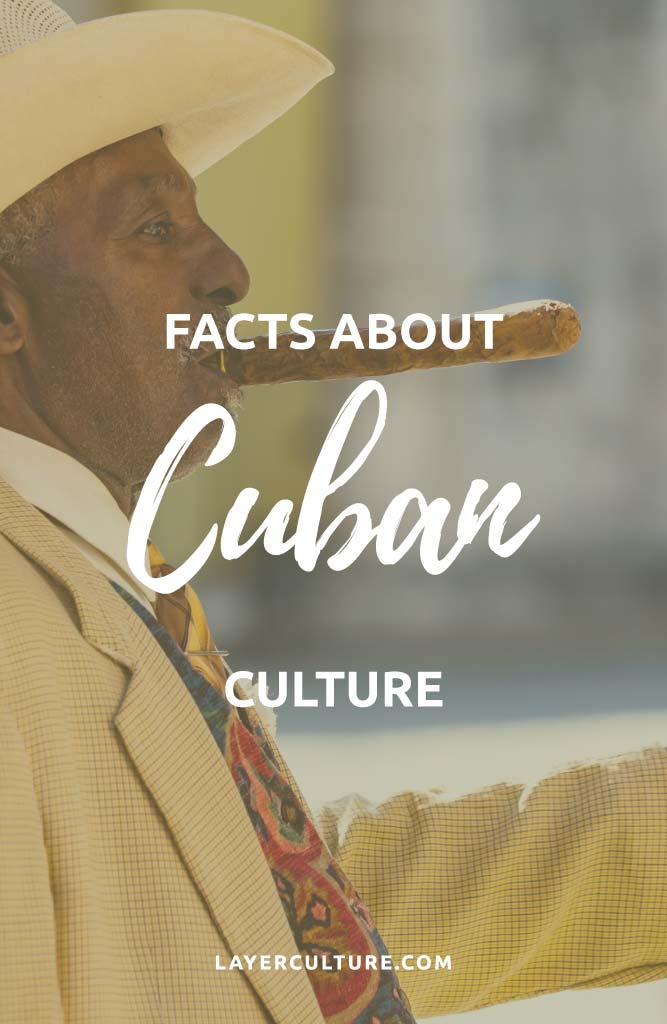 Did this help your search for interesting facts about Cuba?

This website uses cookies to improve your experience while you navigate through the website. Out of these, the cookies that are categorized as necessary are stored on your browser as they are essential for the working of basic functionalities of the website. We also use third-party cookies that help us analyze and understand how you use this website. These cookies will be stored in your browser only with your consent. You also have the option to opt-out of these cookies. But opting out of some of these cookies may affect your browsing experience.
Necessary Always Enabled
Necessary cookies are absolutely essential for the website to function properly. This category only includes cookies that ensures basic functionalities and security features of the website. These cookies do not store any personal information.
Non-necessary
Any cookies that may not be particularly necessary for the website to function and is used specifically to collect user personal data via analytics, ads, other embedded contents are termed as non-necessary cookies. It is mandatory to procure user consent prior to running these cookies on your website.
SAVE & ACCEPT
45 shares