Do you want to know how to dance Samba?

Samba is one of the most iconic dances in the world. It’s instantly recognizable and pertains to the culture of freedom of expression.

You’ll typically find the Samba at Carnival in Rio, where thousands dress in flamboyant and scantily clad outfits.

How to Dance Samba

One question you may be asking yourself is, “Is the Samba easy?”

Well, with a few basics, you can tap into this amazing tenet of Brazilian culture and connect yourself with a unique Latin dance style.

Samba is frequently identified as the music expression of urban Rio de Janeiro.

It began development as an iconoclastic Rio dance during the first years of the 20th century. Early styles of samba – and specifically ‘Samba de Roda’ – are traced back to the Recôncavo region of Bahia.

These early versions of Samba date back to as far as the 17th century, where informal dancing followed a candomblé ceremony.

The former slaves from the Bahia region mostly ended up on the coast in Rio de Janeiro, taking their dance along with them.

When they discovered the many styles of music and dance that were already prevalent in the city, they incorporated them into Samba.

Styles in vogue at the time were the Polka, the Maxixe, the Lundu, and the Xote.

The Samba Carioca Urbana took the uniqueness of the Samba and made it truly Brazilian with a style, unlike any other Latin dance around.

The Samba became popular towards the mid-twentieth century and it was viewed as an urban and modern expression.

Samba and its genre of music became a huge hit in the favelas and other neighborhoods.

It was played on radio stations, making the urban expression a limitless entity that never prejudiced against wealth or hierarchy.

Samba was initially viewed by some with prejudice and discrimination. It has roots with former slaves, thus having roots with black culture.

This was in part due to its hypnotic rhythms and melodic intonations in addition to its playful lyrics.

Eventually, this was an element of Samba that the working people of Brazil were tolerant towards. The White middle class accepted Samba as being intrinsically Brazilian as much as the white working classes.

Other musical genres derived from samba, such as:

All these sub-genres (if you like) have seen prominence in recent years.

You may have heard of Bossanova music before and may not realize that it stems from Samba.

‘Ballroom Samba’ is usually danced to music written in 2/4 time. This means there are two beats in each measure.

The basic box step consists of three steps. This means that three steps are performed in two beats of music.

Usually, you count 8 beats before resuming the count.

The leading partner in the samba is the one who takes control of the dance to lead their partner around. This is oftentimes done by the male in a male/female partnership.

If you’d like to be the leading partner, practice the 6 basic steps of the samba on your own.

The steps are as follows:

The other partner in samba does the following steps or a mirrored version of the leading partner’s.

To practice the following steps, try:

Both partners face each other for the start of the sidestep.

This is one of the more important elements of dancing the Samba with a partner, so it would be best to master this aspect of the dance as early as possible in your learning.

The rhythm of samba is a little different from other ballroom dances. As you listen to the beat of the music, count the rhythm as “one-uh-two, three-uh-four, five-uh-six, seven-uh-eight.”

This will help you move your body in time to the music as you step.

The “samba bounce” adds fluidity and motion to your movements. As you step back and forth, bend your knees slightly and bounce up and down through each step.

Adding your hips gives your dance a bit of style and attitude.

Unlike the Salsa dance, as you dance, rock your hips to the right and left every time you take a step. Not only will this add fluidity, but it also gives the samba its flirtatious charm.

The most recognizable element of samba is probably the ‘Samba bounce’, which is achieved through rhythmic bending and stiffening of the knees.

Soon, you’ll be able to master the bounce and the side step to become a prominent Samba dancer. You can confidently display your Samba prowess in preparation for Carnival!

Have you managed to get your Bachata steps down to a T? Now get yourself familiarized with the most famous Samba songs.

With these Samba rhythms, you shouldn’t have any trouble impressing your friends, family, and other bystanders.

How to Dance Samba

The cultural significance of Samba to the continent of South America is unfathomable.

It’s perhaps the most well-known South American dance and it’s not only because of Carnival.

It has such a hypnotic rhythm and spectacle, that foreigners can’t look away. If you’re looking into soaking yourself with Brazilian culture, there’s no better start than with Samba. 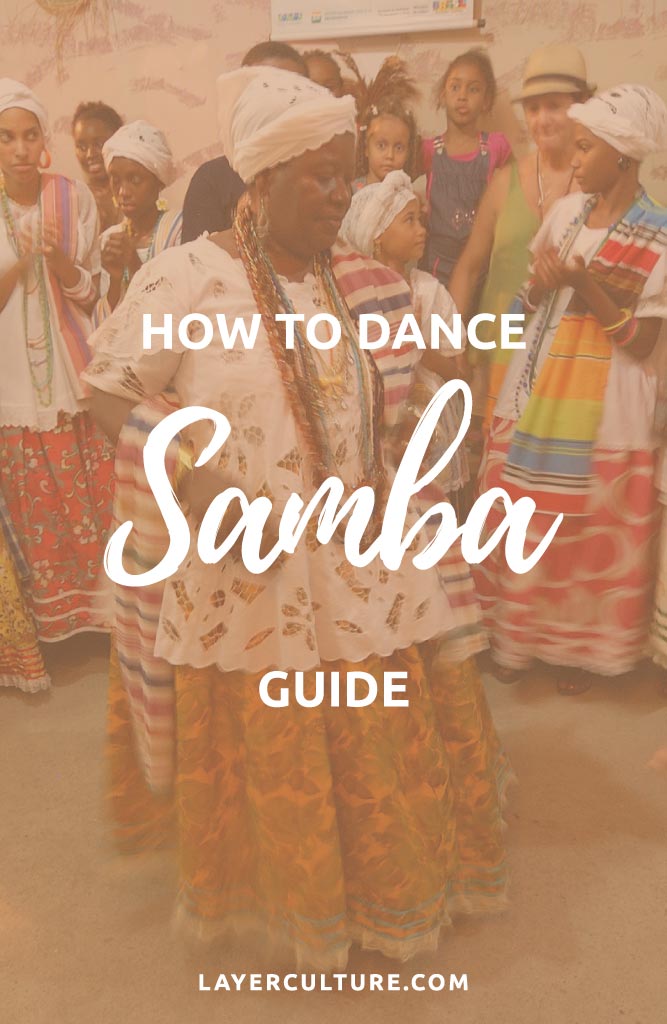 Missing something? Got Samba tips, tricks or advice we can learn from?