Do you want to know how to dance Mambo?

You may have heard of the Mambo from many tenets of popular culture. West Side Story majorly popularized the dance after the widely-viewed movie was released in 1961.

The Mambo became a hit after the scene in West Side Story in which the two rival gangs face off in a dance competition.

You may have also heard the song Mambo no. 5 by Lou Bega, which charted at number 1 in many different countries.

How to Dance Mambo

Mambo is a Latin dance of Cuba that originated in the 1940s when the music genre of the same name became popular throughout Latin America.

The original ballroom dance which emerged in Cuba and Mexico was related to the dance literally named the danzón, albeit a faster and less rigid alternation.

In the United States, it replaced the rumba as the most fashionable Latin dance. After the popularisation of many different Latin dances, a new type of mambo dance was popularized in New York.

It was a syncopated and less rigid form of the danzón which gave dancer license to express themselves.

Havana native Pérez Prado brought the dance from Cuba to Mexico and it became a Latin staple.

The original mambo dance was characterized by freedom of expression on the dancefloor along with a complex combination of footsteps.

The Mambo dance originated with Pérez Prado and was popular in the 1940s and ’50s in Cuba, Mexico, and New York.

You’ll find that the original Mambo dance is completely different from the modern version known as the Mambo in New York. The new form is also known as salsa “on 2”.

The original mambo dance contains no basic or breaking steps at all, but a complex combination of footings.

In the 1940s, Puerto Rican dancer Pedro Aguilar (known as ‘Cuban Pete’) became known as the greatest Mambo dancer of all time.

He popularised the dance in New York City, with regular visits to the Palladium with his wife.

The modern Mambo dance from New York was popularized in the late 1960s into the 1970s by George Vascones, president of a dance group known as the Latin Symbolics.

This is the version in which the footsteps are less complicated and easier to follow.

George Vascones continued the Mambo dance tradition which started two decades earlier during the Palladium era which was huge around the time of Cuban Pete.

How to Dance Mambo

The video below explains how to the Mambo dance concentrating on the forward and back step:

Lead – the lead starts by putting the left foot forward (as in most dances) and shifting the weight onto it.

The right foot stays in place, the leg-lengthening. Then the lead rocks back onto the right foot, waiting until full weight has been transferred to it before sliding the left foot back next to the right.

The dancer then transfers the weight back to the left foot in preparation for stepping over on the right, taking weight on that foot, and dragging the leftover to close the step.

All of these steps are done with the feet staying flat on the ground.

In fact, often in dance studios, teachers will have the students dance with paper towels under their feet, sliding around the floor in the patterns.

Follow – To a great extent, the partner mirrors the steps of the lead. Starting with the weight on the left foot, the right slides forward, and the full weight of the body comes onto it in a rocking forward motion.

Stepping back, the weight shift results in a step to the left, the right foot coming to close at the end of the basic next to the left. Weight shifts onto the right then in preparation for the Back Basic.

Lead – The lead puts the right foot back, bending the left knee as the weight comes to rest on that foot. The left foot shouldn’t move. After the weight has rocked back onto it, push forward again onto the left leg.

Step forward and close, changing weight onto the right leg, in preparation for going back into the forward basic (or whatever other move is planned).

Follow – Extending the left foot back, the right knee bends and there is a rocking motion back as the body shifts onto the left foot.

The right should never leave the floor, however, the shift is subtle.

Rocking forward, the weight comes back onto the right and as the left comes back to close the dancer has completed the most basic of mambo steps.

While the basic step is fun, the true magic of the Mambo comes in the fast and intricate permutations created by the dancers as they move together.

The best thing is that since this is a Latin dance, many of the same moves that applied in Salsa, Rumba, and other Latin dances work very well.

Especially useful in tight situations, the cross-body lead is a tool used by the lead to guide the follow into a new place on the dance floor, facing directly opposite of the original position.

In other words, if the lead starts facing a wall, at the end of the move the follow will be facing the wall.

Affectionately known by some dance instructors as “Drag-Her-Around”

The cross-body lead is three steps that shift weight on the same feet as the basic step, with the variation of a 180-degree pivot turn being performed after the first weight shift.

The follow simply takes the steps forward and across the lead’s left side, performing the same kind of 180-degree turn but in the form of two 90 degree turns in the second and closing step.

A stylistic variation, the crossover break occurs when both the lead and follow keep their hands connected but let their feet turn one-quarter turn away from each other, moving back into what is called (in ballroom) “fifth position.”

This should not be confused with the fifth position in ballet; the foot is behind and slightly to the side of the other.

However, the most important is that weight should be entirely shifted onto the rear foot. A common error is to simply “tap” the foot, which dilutes the full effect of the break.

These are only two examples of simple moves, and they can be combined to create a move called the “curved-forward basic.”

Ideally, though, mambo dance steps should be learned first in a ballroom dance studio and then out in the clubs. The dance is alive there for all to learn and enjoy.

Once you’ve got your salsa steps down to a T, it’s time to familiarize yourself with the most famous Mambo songs.

See these world-famous Mambo songs below:

Now you shouldn’t have any trouble impressing your friends and family with these Mambo rhythms.

How to Dance Mambo: Conclusion

The Mambo is historically important to the cultures of Cuba and Mexico. New York was the major proponent without which it wouldn’t still exist.

Thanks to the talents of Cuban Pete and the many schools that brought innovation to the dance, it’s still one of the most exciting dances to come out of the Caribbean.

Hopefully, with this guide, you can be a Mambo Master in no time! 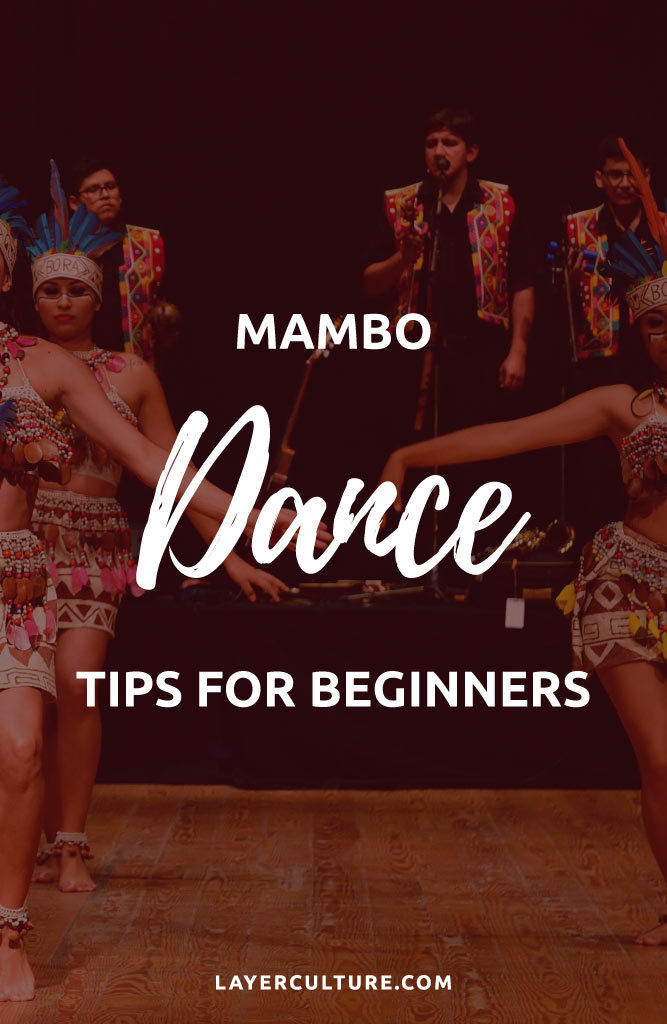 This website uses cookies to improve your experience while you navigate through the website. Out of these, the cookies that are categorized as necessary are stored on your browser as they are essential for the working of basic functionalities of the website. We also use third-party cookies that help us analyze and understand how you use this website. These cookies will be stored in your browser only with your consent. You also have the option to opt-out of these cookies. But opting out of some of these cookies may affect your browsing experience.
Necessary Always Enabled
Necessary cookies are absolutely essential for the website to function properly. This category only includes cookies that ensures basic functionalities and security features of the website. These cookies do not store any personal information.
Non-necessary
Any cookies that may not be particularly necessary for the website to function and is used specifically to collect user personal data via analytics, ads, other embedded contents are termed as non-necessary cookies. It is mandatory to procure user consent prior to running these cookies on your website.
SAVE & ACCEPT
5 shares