In this article, I will cover some hard Spanish words to practice.

On my language learning journey, I have found it challenging to pronounce even the most basic Spanish words in some cases.

Every language has words that are particularly difficult to pronounce, and Spanish is definitely not the exception!

If you’d like to challenge yourself along your language learning journey, reiterating hard Spanish words is a great way to do that.

That’s why in this article you’ll find 10 of the most difficult words in Spanish you should learn.

I’ll show you how to use them in a sentence and I’ll tell you all about their meaning so you can integrate them into your vocabulary!

In a bid to help you learn Spanish faster, here’s a list of 10 hard Spanish words that give Spanish students the most trouble.

There are many more difficult words in the Spanish dictionary, but in this article, I’d like to showcase some words I’ve had trouble with.

In English: Career or race.

This is a common Spanish word and it’s often used in casual conversation when you ask someone what their career is or what they do for a living.

What makes it hard to pronounce for learners is the combination of a rolled and a soft R.

It takes practice to master the Spanish R, so be patient. Also, students often add the [i] after the E in “carrera”, don’t make that mistake.

Though this is the word for easy, it can actually be a bit difficult to master the correct pronunciation. That’s because the accent is not where you expect it to be.

The same thing happens with the word “difícil” (difficult). It’s common for students to say “fa-CIL” or “DI-fi-cil”, instead of “FA-cil” and “di-FI-cil”, which is the correct way.

Pay attention to the accent and stress the syllable that carries it.

All Mexican stereotypes aside for a second, Huevos revueltos are common for breakfast in many countries. So, this is a very popular word. The difficulty lies in the V because the pronunciation is a soft B.

Additionally, the word has a diphthong that repeats, UE. There’s no room for compromises here, you have to pronounce the V as a soft B; your lips should barely touch. For the diphthongs, simply say both vowels and then mash them together so “oo-eh” turns into “weh.”

Idea is a confusing word because it looks exactly the same as in English, so we have to teach our tongue to say it differently.

You have to learn to resist the urge, so practice saying “ee-DEH-ah” as many times as you need until it becomes second nature when you speak Spanish.

This one is difficult because of the double R. In Spanish, the R is rolled when it’s at the start of the word and when it’s doubled.

However, the standalone R also has a different pronunciation from English. For English speakers, it’s a challenge to learn both sounds, but with consistent practice, you will accomplish it.

Say T in English; that’s the correct position of the tongue to say the R in Spanish.

When your tongue is there, slightly touch the roof of your mouth with it. To roll your R, you need to vibrate your tongue in that position. The more you practice, the easier it will get!

In English: Weird or rare.

This word is quite common and it presents two challenges: the R and the pronunciation of the A because it’s difficult when it’s between to Rs. So, take your time with it!

🗣️“Acabo de llegar del aeropuerto.” / “I just got here from the airport.”

The challenge of aeropuerto is the R and the diphthongs. For the first diphthong, AE, say each vowel separately and then mash them together; from “ah-eh” to “ay”.

Then there’s the UE diphthong followed by the R. Practice it separately and then say it together.

The challenge here is pronouncing the S followed by C. For proper pronunciation, you need to do this clearly.

“¡Hasta luego!” is one of the most common ways to say goodbye, but “luego” is a sneaky word when it comes to proper pronunciation.

Students often make the mistake of saying “lueko”, but you have to remember the G is relaxed when it’s between two vowels. Practice makes perfect!

Last but not least, we have the challenge of three R sounds in a single word. Not to mention there’s also the G, which is pronounced like a /j/ when it’s between E and I. Practice, practice, practice!

There you have it, 10 hard words in Spanish to get you started. Use this list to practice so you can add them to your vocabulary and use them in everyday conversations!

During your language learning process, you will encounter many complicated words in Spanish.

The ones presented today will give you a head start as long as you practice them and work to integrate them into your vocabulary.

However, you will continue to find hard words in Spanish. The trick is to practice pronunciation consistently and it will get easier!

The more difficult words you master, the richer your overall Spanish conversations will be as you continue along the road to fluency. 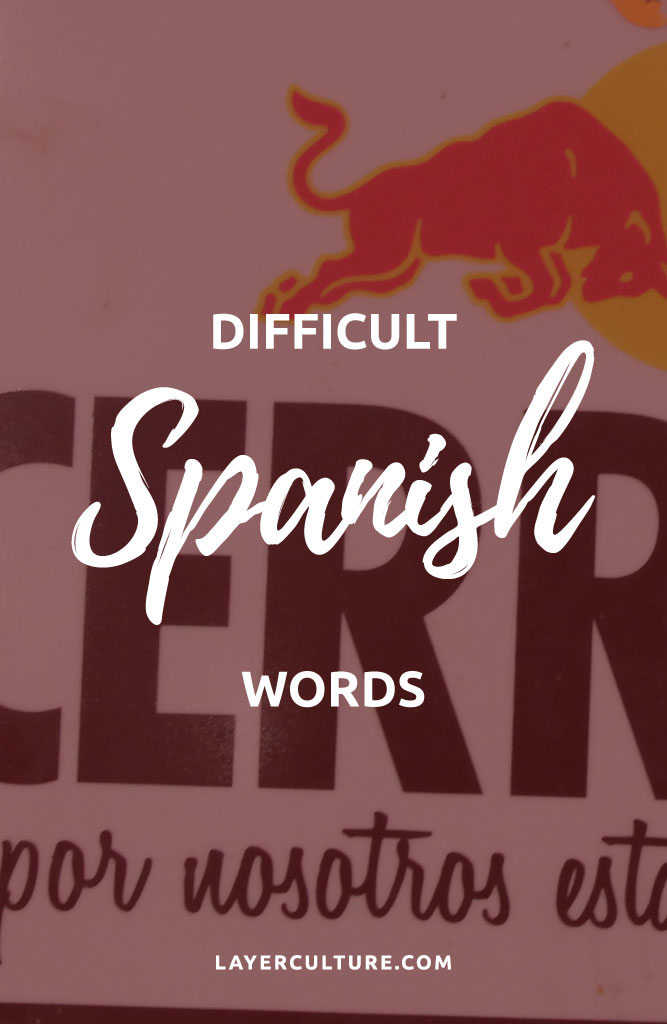 Did you find these words in Spanish difficult to pronounce?