You are here: Home / Latin Culture / Facts About Peru

In this article, we are going to learn some facts about Peru.

Peru, known as the land of the Inca and their architectural masterpiece of Machu Picchu is a land steeped in mysticism and unique traditions.

The culture of Peru is becoming increasingly popular throughout the world due in large part to its Ayahuasca ceremonies and Shamanism.

Not to mention the magnificent Incan and Nazca architectural feats, world-class cuisine, and vibrant festivals.

Peru is one of 17 mega-diverse countries in the world, with nearly 90 distinct microclimates throughout the country.

This unique diversity of climates is not home to thousands of different species of plants, birds, reptiles, and other mammals. You can even find some amazing beaches scattered around the country.

One interesting fact about Peru is that it’s rich in natural resources, including gold, copper, silver, natural gas, coal, and phosphate.

The Peruvian people are proud of their national identity, which is reflected in their many festivals throughout the year.

Here are some quick general facts about Peru:

With so many tourist attractions in Peru, the country attracts thousands of newcomers every year who wish to see all the beauty the country has to offer.

The Peruvian people are a unique blend of Indigenous, Spanish, and African ethnicities.

Preceding the arrival of the Spanish in 1532, Peru was populated by nearly 50 + unique indigenous groups. Some of these groups included the Aymara, Inca, Achuar, and Shipibo.

An estimated 25% of Peru’s population identified themselves as being of Indigenous descent.

Many indigenous groups perished during the Spanish colonization due to disease and war, much of their cultural heritage has survived in the form of music, dance, art, and architecture.

Shamans are holistic healers who are said to possess ancient sacred knowledge about the energies of Mother Earth and the Cosmos.

The spiritual practice of shamanism focuses on healing a person’s energy field through the aid of plants and various meditative practices.

Peruvian shamanism is an easily identifiable aspect of their cultural heritage.

When it comes to architecture Peru is known for its magical landscape painted with architectural masterpieces of the Incas and colonial buildings.

Throughout the colonial period, baroque and renaissance architectural styles were incorporated, while maintaining much of the original Incan architecture.

Cusco retained its grid-like street pattern and open plazas designed by the Incas.

Each year the mythical zeal of Peru’s architecture draws countless visitors to the country. The Indigenous Nazca culture of Peru created the famous Nazca lines.

The Nazca Lines are a series of geoglyphs carved into the ground. Located roughly 150 miles south of the Capital, these lines depict various plants, animals, and shapes.

Being over 2,000 years the Nazca lines can only be fully viewed from the air or space.

Having been studied by researchers for nearly 80 years, these lines still remain a mystery. The Nazca lines were designated a UNESCO World Heritage Site in 1994.

Peru is home to 90 distinct micro-climates, which contribute to its agricultural success.

Some of the agricultural commodities grown in Peru are potatoes, asparagus, maize, rice, corn, coffee, and sugarcane. Peru also provides half of the World’s supply of quinoa.

Due to Peru’s infrastructural challenges, synthetic fertilizers are used despite the abundance of natural fertilizer in the form of guano, which is bat and seabird excrements.

There are over 55 variety of corn, which includes yellow, white, black, and purple corn.

25,000 different species of plants grow in Peru, of which 4,400 are actively used by the population.

As a result, chefs from around the Globe fly to Peru to learn about Peruvian culinary secrets about growing and cooking their own ingredients.

One interesting fact about Peru is that it offers a wide variety of produce from the high altitudes regions of the desert to the lowlands of the Amazonian rainforest.

Peru’s culinary delights have been heavily influenced by European and immigrant cultures throughout the centuries.

Pisco Sour, Cuy, and Ceviche are National Peruvian dishes.
The Peruvian people are passionate about their culinary heritage.

Many of Peru’s traditional culinary dishes have been inspired by Spanish colonizers dating back to the 16th century as well as subsequent immigrant migrations.

The Cuy or Guinea Pigs are served crispy with head, legs, and eyes intact. Ceviche is fresh raw fish marinated in citrus juices, such as lemon or lime, spiced with aji, or chili peppers.

Many of Peru’s traditional dishes and drinks were created by non-Peruvians.

Peruvian festivals held throughout the year celebrate their cultural heritage.

There are numerous celebrations throughout the year, some are major festivals, while others are more obscure.

The festivals of Fiesta de la Candelaria celebrates the Virgin of Candelaria, the patron saint of the town of Puno.

It’s the largest festival in Peru. The Festival Internacional de la Vendimia is an agricultural celebration where a queen is chosen to stomp the first grapes of the seasons’ harvest ceremoniously.

The Fiesta de las Cruces is the most important Peruvian celebration.

Celebrated during May, this festival is not limited to one specific town or village, it’s celebrated throughout Peru.

This festival has religious roots whose origins are said to have focused on searching for the cross upon which Jesus was crucified.

Traditionally, it’s not a Peruvian celebration; however, the Peruvian people incorporate their own cultural identity into the celebrations.

Similar to other celebrations, music, dance, and even bullfighting are incorporated into the festival.

The Indigenous peoples of Peru have shown great resiliency through centuries of Spanish colonization. Not to mention the various waves of immigrants through the practice of shamanism.

Even today various Indigenous languages still are spoken throughout the country.

A vast majority of the Indigenous population in Peru still produces traditional Peruvian apparel for both everyday uses and its unique celebratory festivals.

Last of all, Peru is safe and a place you can travel to learn more about all of the above. 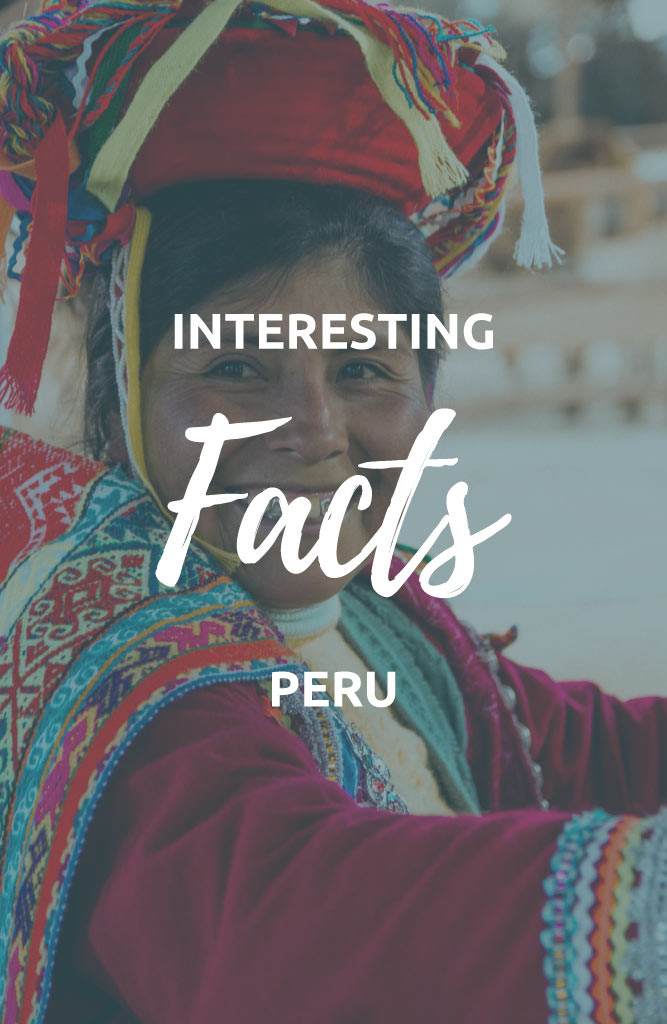 Did this help your search for interesting facts about Peru?

This website uses cookies to improve your experience while you navigate through the website. Out of these, the cookies that are categorized as necessary are stored on your browser as they are essential for the working of basic functionalities of the website. We also use third-party cookies that help us analyze and understand how you use this website. These cookies will be stored in your browser only with your consent. You also have the option to opt-out of these cookies. But opting out of some of these cookies may affect your browsing experience.
Necessary Always Enabled
Necessary cookies are absolutely essential for the website to function properly. This category only includes cookies that ensures basic functionalities and security features of the website. These cookies do not store any personal information.
Non-necessary
Any cookies that may not be particularly necessary for the website to function and is used specifically to collect user personal data via analytics, ads, other embedded contents are termed as non-necessary cookies. It is mandatory to procure user consent prior to running these cookies on your website.
SAVE & ACCEPT
20 shares