You are here: Home / Latin Culture / Interesting Facts About Mexico

So, you’re eager to learn some interesting facts about Mexico?

Contrary to popular belief, Mexico is not a country filled with drug lords, high crime or lazy Mexicans eating burritos.

Mexico is much better than that so Let’s dispel some stereotypes.

The origins of Mexico’s culture can be traced back to nearly 3,500 years.

The history goes right back to the pre-Colombian Mesoamerican era that consisted of several advanced indigenous civilizations.

Civilizations such as the Olmec, Zapotec, Mixtec, Aztec, Mayan, Toltec, and Teotihuacano before the conquest and colonization of Spanish settlers in the 16th century.

Mexican culture today is a reflection of the gradual blending of native culture (Mesoamerican) with other Spanish and immigrant cultures.

In fact, Mexico has one of the world’s richest histories and cultures.

Here are some general facts about Mexico:

See these Mexican traditions and customs to get a deeper insight into what gets celebrated on a regular basis in and around Mexico.

Many of Mexico’s older architectural structures, including entire sections of Pre-Hispanic and colonial cities, have been designated World Heritage sites for their historical and artistic significance.

Mexico has the largest number of sites declared World Heritage sites by the United Nations Educational, Scientific and Cultural Organization (UNESCO) in the Americas.

Some of these sites include:

It was constructed in the 1520s by the indigenous Totonacas from the river and volcanic stone as well as coral rock, and a special glue mixture comprised of snails, cactus, oyster, seawater, and calcined lime.

It is believed to be the home of Herman Cortes, although he did not live there.

The Casa de Cortes dwelling is believed to be an entry point during that time for arriving Spaniards, African slaves, and storage.

People traveling to Mexico usually visit the Mayan ruins and or one of the many pyramids.

Since Mexico has pyramids, which are different from the pyramids in Egypt – it holds some of the most important landmarks in the Americas.

They were also used as landmarks for navigation, and there’s some evidence to suggest that the pyramids were also used for military defense by some city-states.

The Olmecs, the first major Mesoamerican civilization, built pyramids between 1,000 BC. – 400 BC. According to Wikipedia, Mexico has 29 pyramids.

The term ‘artesania’ (arts & crafts) collectively refers to Mexican handcrafts and folk art fashioned for the purposes of utilitarian, decorative or other purposes.

Items such as wall hangings, vases, and other items, were created for celebrations, festivities, and religious rituals.

Mexican artesania has its origins in the crafts of the many Pre-Hispanic cultures within Mesoamerica.

Our Lady of Guadalupe is a powerful symbol of Mexican identity, faith, and culture. It marks the date in 1531 when the Virgin Mary purportedly appeared before a native Aztec man named Juan Diego.

This basilica is the most visited Catholic pilgrimage site in the world and the world’s third most-visited sacred site.

Our Lady of Guadalupe in Spanish: Nuestra Senora de Guadalupe.

Did you know that one of Mexico’s most famous writers, Octavio Paz, is the only Mexican to have been awarded the Nobel Prize in Literature in 1990?

See more facts about Mexico’s most prolific author and poet:

Music is an essential part of Mexican culture and features a wide range of musical genres and performance styles.

Mexico’s music can be traced back thousands of years to the days of the Aztec and Mayans who performed ritualistic music during ceremonies and other events.

Mexico’s music is largely influenced by its diverse history as well as the indigenous native peoples of Mesoamerica, European settlers, and African slaves.

Two dynamic musical genres in Mexican culture everyone should know about are:

Originating on ranches in rural parts of Mexico, Rancheras are varied and can reflect the tempo of a waltz, polka or a bolero.

Los Voladores de Papantla, which is considered by UNESCO as an Intangible Cultural Heritage is one of Mexico’s most unique ceremonies.

Different from many other Latin dances, it consists of five participants, four of whom launch themselves off a 30-meter high pole while the fifth person remains on top, dancing and playing a flute and drums.

According to one myth, the ritual was created to ask the gods to end a severe drought. Los Voladores de Papantla has its origins near the Puebla-Veracruz border.

The most recognized piece of traditional Mexican clothing is the Sombrero, sarape, charro suit, guayabero, baja jacket, and poncho.

The most recognizable pieces of traditional women’s clothing are the huipil, quechquemitl, and rebozo.

Mexican clothing has its origins in native and European elements. Before the colonization of the Spanish in the early 1500s, traditional Mexican clothing was primarily made from cotton, agave, and bark.

After the arrival of European settlers, the native Mexican people started incorporating silk and wool.

The culture of Mexico is a reflection of its complex and extensive history dating back over 3,000 years with evidence that it was first populated some 13,000 years ago.

Through the gradual blending of native Mesoamerican, Spanish, and other immigrant cultures Mexico today enjoys a vast array of cultural traditions.

Much of Mexican culture revolves around religious values and the church, as well as the concept of family and inclusiveness.

So, we’ve finally come to the end of this piece on cultural facts about Mexico.

I hope you learned something and maybe you’re even inspired to travel to Mexico in the near future. 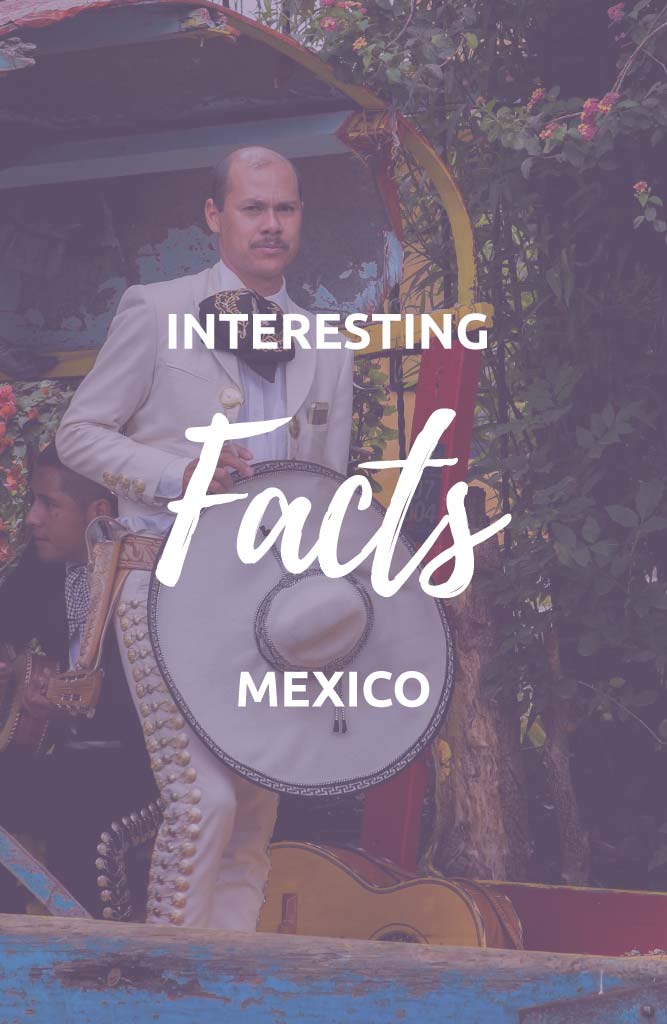 Did this help your search for interesting facts about Mexico?

This website uses cookies to improve your experience while you navigate through the website. Out of these, the cookies that are categorized as necessary are stored on your browser as they are essential for the working of basic functionalities of the website. We also use third-party cookies that help us analyze and understand how you use this website. These cookies will be stored in your browser only with your consent. You also have the option to opt-out of these cookies. But opting out of some of these cookies may affect your browsing experience.
Necessary Always Enabled
Necessary cookies are absolutely essential for the website to function properly. This category only includes cookies that ensures basic functionalities and security features of the website. These cookies do not store any personal information.
Non-necessary
Any cookies that may not be particularly necessary for the website to function and is used specifically to collect user personal data via analytics, ads, other embedded contents are termed as non-necessary cookies. It is mandatory to procure user consent prior to running these cookies on your website.
SAVE & ACCEPT
47 shares