Do you fancy learning some interesting facts about Ecuador?

To start, one interesting fact about Ecuador is that it’s one of 17 megadiverse countries in the world due to its unique biodiversity.

Ecuador’s ecosystem encompasses over 132 species of hummingbirds and roughly 4,000 species of orchids.

Our cultural journey through Ecuador begins thousands of years ago with one of the oldest civilizations in recorded history, the Paleo-Indians.

The Paleo-Indians eventually gave way to the Inca empire that was subsequently conquered by the Spanish in the 16th century.

Throughout history, each indigenous group has developed its own unique culture which has blended with other indigenous cultures.

This mixing and blending of cultures have created diverse artistic, architectural, literary, and other forms of cultural expression.

One of the traditions observed in Ecuador is the Summer Solstice festival of Inti Raymi, which dates back to the Inca empire.

Interestingly, this celebration of Inti Raymi has been associated with the Catholic festivals of Saint John the Baptist.

Despite being banned by the Spanish in 1535, Inti Raymi’s resurgence into modern-day Ecuador has become quite popular.

Ecuadorian people are considered very welcoming and hospitable. It’s not uncommon to find several generations of a family living under one roof.

Common-law relationships are typically in rural, coastal regions. A majority of Ecuadorians get married in their early to mid-’20s.

A majority of the traditions and family values observed in Ecuador are derived from Roman Catholicism, which encompasses 80% of the population.

Did you know that Ecuador’s musical origins are over 10,000 years old?

Ecuador can trace its musical roots back to the pre-Inca era. Much of these artistic expressions were centered around religious ceremonies and wars.

Most of the music composed during that time was performed using basic wind and percussion instruments, such as flutes and drums.

During the Spanish colonization during the 16th century stringed instruments were introduced to create new musical genres.

The musical expressions of Ecuador continue to evolve as cultures collide and blend with each other.

Pasillo is a form of Ecuadorian music famous throughout the region is considered to be Ecuador’s National musical style.

This musical genre developed during the 19th century and became closely associated with Ecuadorian nationalism and the war of independence.

During the 20th century, it became more popular with songs expressing the enchantment of the landscape, the bravery of its people and the beauty of Ecuadorian women.

The continuing popularity of Ecuadorian Pasillo is due in part to exceptional singers throughout the 20th century.

Ecuador’s literature is unique compared to other Latin American countries and many of its authors are not well known outside of their native country.

Writer Juan Leon Mera is considered to be the father of Ecuadorian literature.

He wrote the 1st novel in Ecuador titled: Cumanda published in 1879 which chronicles the tale of an indigenous native and European who fell in love among the Amazonian jungles of Ecuador.

One interesting theme I found about Ecuador’s literature is that it has a focus on social, political, cultural, and historical topics.

One author from the early 20th century, Jorge Icaza Coronel published his novel Huasipungo in 1934 and has since gained international recognition.

It chronicles stories of exploitation among the indigenous people from the European settlers.

As new authors emerge, Ecuadorian literature is sure to leave an indelible mark on the International stage.

One prevalent form of artistic expression in Ecuador is graffiti.

Due to the political unrest that often occurs within Ecuador, many artists have expressed themselves and their views through graffiti.

Much of the graffiti found in Ecuador, specifically Quito, is often poetic, yet always thoughtful.

Artists express their opinions about their country, their city, the state of life in Ecuador, and often political in nature.

Although illegal Ecuador’s street art has become an integral aspect of their culture.

Long before the Spanish colonization in the 16th century, the indigenous peoples of Ecuador created extravagant handcrafts.

A majority of the handicrafts created by the indigenous were baskets, ceramics, woodcarvings, sculptures, leatherwork, tapestries, and clothing, including the famous Panama Hats and more.

Today, many modern artists in Ecuador incorporate indigenous influences into their artwork, helping to preserve their heritage.

You can find a lot of indigenous artwork and handicrafts in markets throughout Ecuador.

Ecuadorian architecture has been influenced by several different cultures throughout the past few centuries.

From the Incan ruins to colonial baroque style churches and government buildings.

Ecuador has no shortage of architectural marvels.

Ingapirca is considered one of Ecuador’s major archaeological sites located in the Southern Sierra region. It was built in the late 15th century.

The arrival of the Spanish in the 16th century brought baroque and other styles of architecture to Ecuador.

Throughout the country, Ecuador’s architecture transcends history to become a part of their cultural heritage.

One famous church with predominate baroque style architecture is the Church of the Society of Jesus, also known as la compania. It displays 4 different architectural styles and was completed in 1765.

Other styles incorporated are Neoclassical, Mudejar, and Churrigueresque. It’s one of the best-known churches in Quito and still hosts visitors today. Its main feature is its large central nave.

Ecuador’s culture has undergone a significant and dramatic evolution over the past several hundred years.

Between the 16th and 19th century European, specifically Spanish influences began mixing with the indigenous cultures of Ecuador to create the multi-ethnical diversity we see today.

Ecuador claimed its Independence from Spain on May 24th, 1822. In 2008, Ecuador became one of the first countries to recognize nature as an entity with its own rights.

Learn more from these books about South America to get even more insight into Ecuador and it’s people. 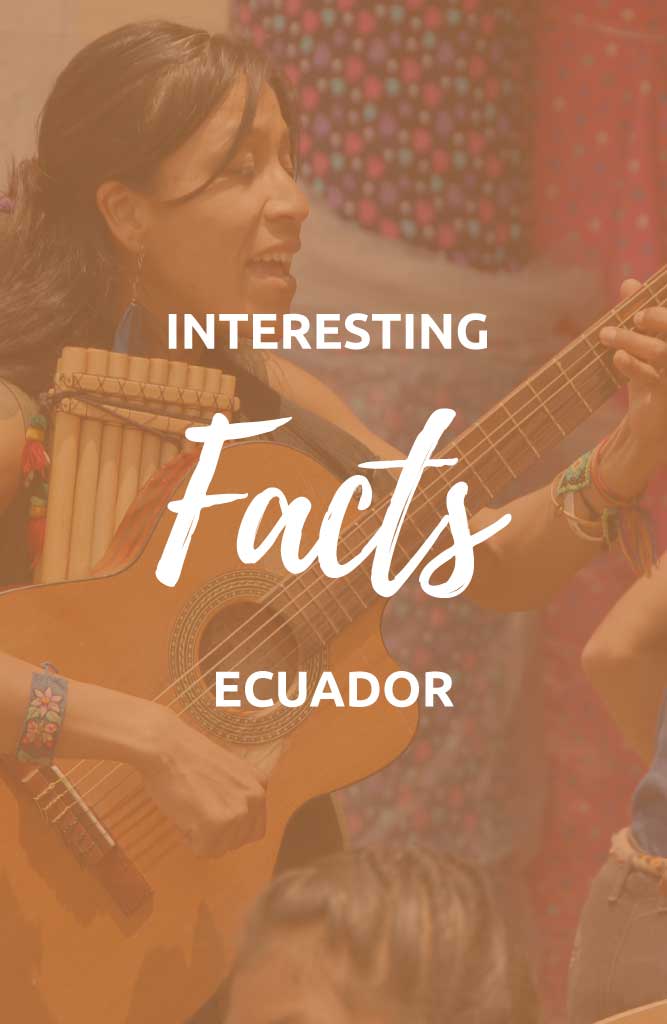 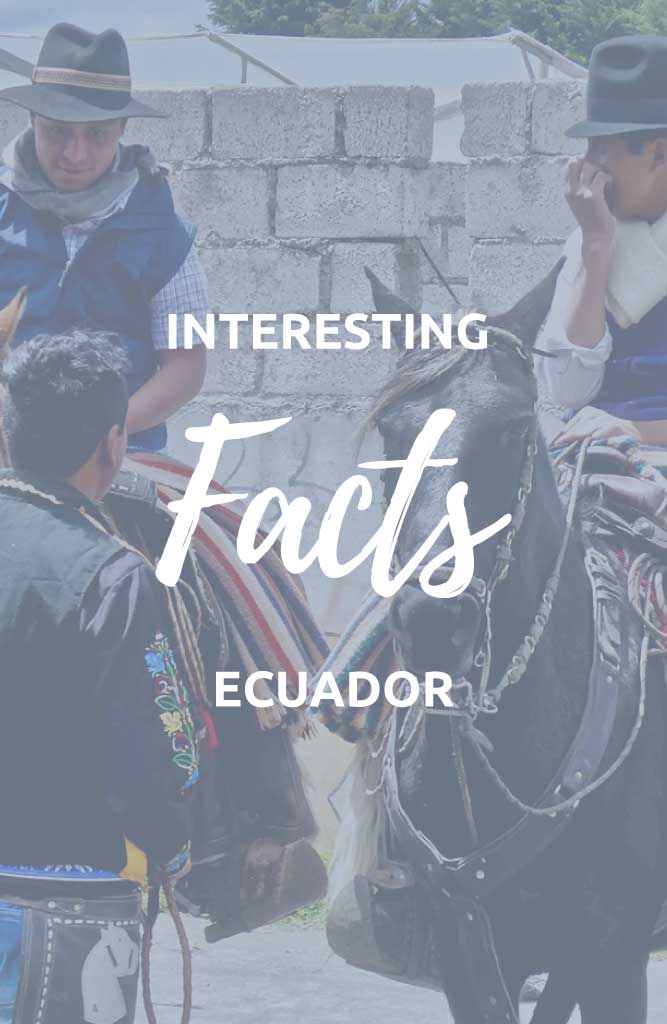 Did this help your search for interesting facts about Ecuador?

This website uses cookies to improve your experience while you navigate through the website. Out of these, the cookies that are categorized as necessary are stored on your browser as they are essential for the working of basic functionalities of the website. We also use third-party cookies that help us analyze and understand how you use this website. These cookies will be stored in your browser only with your consent. You also have the option to opt-out of these cookies. But opting out of some of these cookies may affect your browsing experience.
Necessary Always Enabled
Necessary cookies are absolutely essential for the website to function properly. This category only includes cookies that ensures basic functionalities and security features of the website. These cookies do not store any personal information.
Non-necessary
Any cookies that may not be particularly necessary for the website to function and is used specifically to collect user personal data via analytics, ads, other embedded contents are termed as non-necessary cookies. It is mandatory to procure user consent prior to running these cookies on your website.
SAVE & ACCEPT
16 shares