Want to learn some interesting facts about Costa Rica?

Costa Rica is home to six active volcanoes and enriched volcanic soil produces some of the world’s finest coffee and is often referred to as the Land of Fire.

Costa Rica is a young country relatively speaking, gaining Independence in September of 1821 and has a vibrant history, despite being a young country.

A unique fact about Costa Rica, which surprises people is the fact that it doesn’t have any Mayan or Aztec architecture, due to its geographical location.

Despite the lack of architectural masterpieces, Costa Rica plays a significant role in pre-Columbian society as the cultural, economic, and political hub of the region. If planning a trip to Costa Rica you won’t be disappointed.

Music, art, and literature have been influenced mainly by its European and Indigenous populations. Its many festivals and celebrations pay homage to its history and cultural heritage.

Here are some general facts about Costa Rica that may not have known:

The Chorotegas, Guatusos, and Huetares tribes migrated from the North into Costa Rica and are descendants of the Mayan and Aztecs.

Several Indigenous tribes migrated from the South up into Costa Rica as well.

Before the arrival of the Spanish in 1502, there were up to 25 Indigenous groups that numbered close to 500,000 people.

Today, there are roughly 100,000 people who identify as Indigenous. Costa Ricans call themselves Ticos and Ticas.

The people of Costa Rica are spirited and friendly. Educated and polite, Costa Ricans are open to accepting visitors to their country and enjoy making people feel welcome.

Costa Rica is ranked #1 out of 140, according to the Happy Planet Index. Costa Ricans are a mix of European and Indigenous descent, Mestizo, which comprises 84% of the population.

Many people from North American retire to this country. Costa Rica is a melting pot of various ethnicities and cultures.

The archeological site of Guayabo served as a significant cultural, religious, and political center between 1,000 BC 1,400 AD.

It’s one of the least explored sites in the country with only a small portion having been uncovered.

On July 10th, 2009 Guayabo was declared an International Historic Civil Engineering Landmark by the American Society of Civil Engineers.

Guayabo covers an area of 540 acres on the Southern slopes of Turrialba Volcano.

Initially built in 1757, Las Ruinas de la Parroquia is one of the city’s primary architectural spectacles.

It’s a series of churches that were either stopped mid-construction or destroyed due to earthquakes.

The Church is rumored to have been built by a priest as punishment for killing his brother.

Local legend says the ghost of a headless priest wanders here at night.

The site is listed as a Costa Rican Cultural Heritage Site.

Every year in December and the latter part of February, the festival of Fiestas de Los Diablitos is held to commemorate the battle between the Boruca Indians and the Spanish.

During this event, participants put on masks and costumes to represent ancestral spirits. During the celebration, music, food, dancing, and alcohol is consumed, and it has become an attraction for people visiting Costa Rica.

Semana Santa is a major religious holiday throughout Latin America.

Costa Rica is primarily a Roman Catholic society, comprising just over 70% of the population. As a result, Christmas, Easter, and other religious holidays are celebrated.

Semana Santa, also known as Easter, originating in Spain, commemorates the crucifixion and resurrection of Christ.

Semana Santa has been celebrated since 1526. Catholic Churches in every town host masses and processions.

Olympus, repertory, the 40s generation, urban, and the disenchantment generation.

The various writers and generations they belonged to have contributed immensely to Costa Rica’s National identity and culture.

As with most literary works in Costa Rica, the literature was influenced by its European immigrants.

The most influential literary generation is the Olympus, emphasizing the consolidation of a National Consciousness.

Luis Chaves is Costa Rica’s most famous poet. His most popular and well-known piece of literary work is Asfalto un road poem.

It depicts the story of a couple taking a road trip that subsequently strained and fractured their relationship.

This short book published in 2006 ignores the barriers that separates poetry from prose, which has contributed to its success.

19th century Costa Rican art played a significant role in the evolution of art within the country.

During the 19th century, Costa Ricans has portraits painted by European artists.

When the Europeans began to settle in Costa Rica, they began teaching the Indigenous people and other inhabitants the basics of drawing, sculpting, and painting.

Before the arrival of the European settlers, Indigenous art consisted of handicrafts, such as weaving baskets, and mask making.

Francisco Amighetti is Costa Rica’s most influential and prolific artist.

The art of Francisco Amighetti is famous for rejecting the artistic traditions of European art favoring bolder styles, such as surrealism.

Francisco studied at the Academy of Fine Arts in Costa Rica under the guidance of Tomas Povedano.

Francisco began receiving acclaim for his drawings and cartoons being published in Repertorio Americano.

Francisco Amighetti was primarily a painter, yet produced poetry, and wood engravings as well.

Costa Rica may not possess the impressive architecture of the Mayans or Aztecs, yet it does cement its place in history as a cultural and economic hub during pre-Columbian times.

Costa Rica was a Spanish colony for almost 300 years until declaring Independence in 1821.

Having a short colonial and post-colonial history, Costa Rica has produced some impressive authors and art. 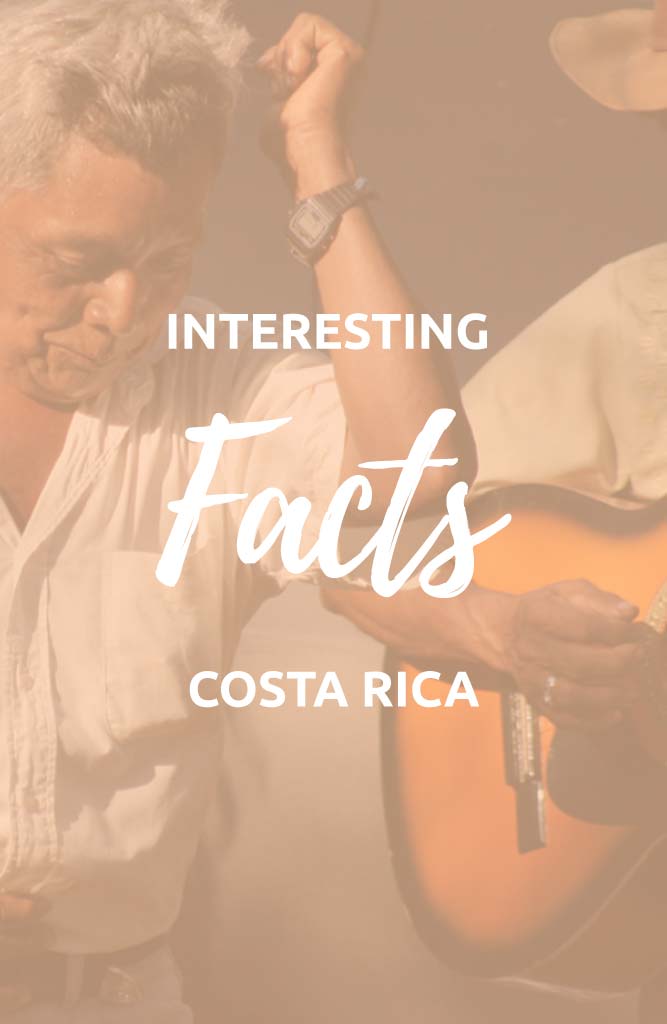 Did this help your search for facts about Costa Rica?

“Dear friend! Some links in this post contain affiliate links. Meaning, if you click through and make a purchase, book a hostel or sign up for a tour, I may earn a small commission at no additional cost to you. Your support means a lot to me and helps me to keep traveling and maintaining the quality of this site for you.”