You are here: Home / Brazil / Interesting Facts About Brazil

Want to learn some interesting facts about Brazil?

Home to the iconic Christ the Redeemer statue in Rio de Janeiro.

Brazil has consistently hosted over 6 ½ million International visitors each year setting a new record in 2017 with 6,588,770.

Brazilians often refer to their country as “o Pais do Futebol” but that’s not all Brazil is famous for.

Encompassing nearly 50% of the landmass in South America; Brazil has a rich multicultural population with many unique cultural contributions to society.

Brazil is one of South America’s most influential countries, rising economic power and one of the world’s largest democracies.

From its architectural achievements to its world-famous dances and music.

Brazil is a country rich in history, culture, and traditions derived from its European settlers.

One of the interesting things about Brazil is that today, and for the first time in history, non-white people make up the majority of Brazil’s overall population.

This shows that Brazil’s census is showing a changing race balance.

Below are some general facts about Brazil. Facts that not only make up the uniqness of such a diverse culture but will help you to undestand the sheer scale of the country:

With so many exotic landmarks in Brazil, you can find some of the world’s best beaches here.

Brazilian people love sports and it’s a ubiquitous part of their lifestyle and culture.

4 popular sports in Brazil include:

The 1st football match played in Brazil was April 1894.

Many say the style of play is rooted in the traditional Brazilian dance named capoeira which we will look at below.

The first recorded accounts of a music school being established in Brazil date back to the mid-17th century.

The Bahian Samba de Roda was added to the UNESCO Intangible Cultural Heritage List in 2005.

Like many of the musical traditions in Brazil, dance makes up a huge part of the performance.

It is the main root of the samba carioca, the samba that is played and danced in Rio de Janeiro, the former capital of Brazil.

The typical instruments used in a samba band are:

Capoeira is another popular form of music, dance and martial art that has integrated itself into the culture of Brazil.

It’s an Afro-Brazilian martial art that combines elements of dance, music, and acrobatics.

On November 26th, 2014 it made its way onto the UNESCO Intangible Cultural Heritage List. Capoeira was illegal in Brazil until the 1930s.

Today, capoeira is viewed as a symbol of Brazilian culture all around the world and in 1970 was taught for the first time outside of Brazil.

Brazil’s Carnival (the carnival of all carnivals) is a major tourist attraction and is held every year in Rio de Janeiro, yet almost every city in the country has shows, events, and performances.

Carnival festivals in Brazil date back to 1723 when the Portuguese brought this festival with them from Europe and has evolved tremendously over the past couple hundred years to reflect Brazil’s unique cultural heritage.

Rio’s Carnival made it on the Guinness World Records in 2004 for being the largest Carnival in the world.

Would you like to get a deeper understanding of Brazilian culture?

Attend Festival de Cachaca, usually held over a long weekend in August, you’ll be able to see displays of samba, forro and reggae, food trucks, and handicrafts from the local town of Paraty in RJ state.

This festival is dedicated to Cachaca, the national liquor made from sugar cane.

The Festival de Cachaca first started in 1982, but the history of Cachaca goes back to the 16th century when the Portuguese began settling in Brazil.

Throughout its early years, literature from Brazil followed the literary trends of Portugal, whereas gradually shifting to a different and authentic writing style in the course of the 19th and 20th centuries.

The earliest account of Brazilian literature occurred around the year 1500 by Portuguese explorers.

Between the 18th and 19th Century Brazilian architecture was a time that witnessed the introduction of more European styles to Brazil.

Styles such as Neoclassical, and Baroque. This was typically combined with Brazilian influences from their own heritage which has produced a unique form of Brazilian architecture.

His works are considered some of the best examples of Portuguese colonial architecture in Brazil.

The Twelve Prophets were sculpted between 1800 – 1805 with many sources claiming he had a hammer and chisel strapped to his hands because he no longer had use of his fingers.

Feijoada is Brazil’s most famous food. It typically consists of black beans that are cooked slowly with pork or beef.

Bacalhao is another popular Brazilian dish with Portuguese origins. Bacalhao is typically baked with olives, onions, potatoes, and tomatoes and served with a drizzle of olive oil and white rice on the side.

One of the cool facts about Brazil and its people is the traditional Brazilian greetings. They are a big part of the culture.

Standard greetings vary from region to region. The most appropriate greeting for anyone is a handshake.

If a female wishes to shake hands with a male, it is expected that she will extend her hand first.

Brazil was a colony of Portugal for over 300 years so a lot of their music, dance, literature, architecture, customs, and traditions derived from the Portuguese, African and indigenous native peoples of that time.

Waves of immigrants in the 19th and 20th centuries brought other European, Middle Eastern and even Japanese to add to Brazil’s already culturally diverse makeup. Today, 62% of Brazilians are aged 29 and under.

We’ve come to the end of this piece on facts about Brazil. I hope you learned something and maybe you’re even inspired to visit Brazil.

Learn more from these books about Brazil to get even more insight into the country and its people. 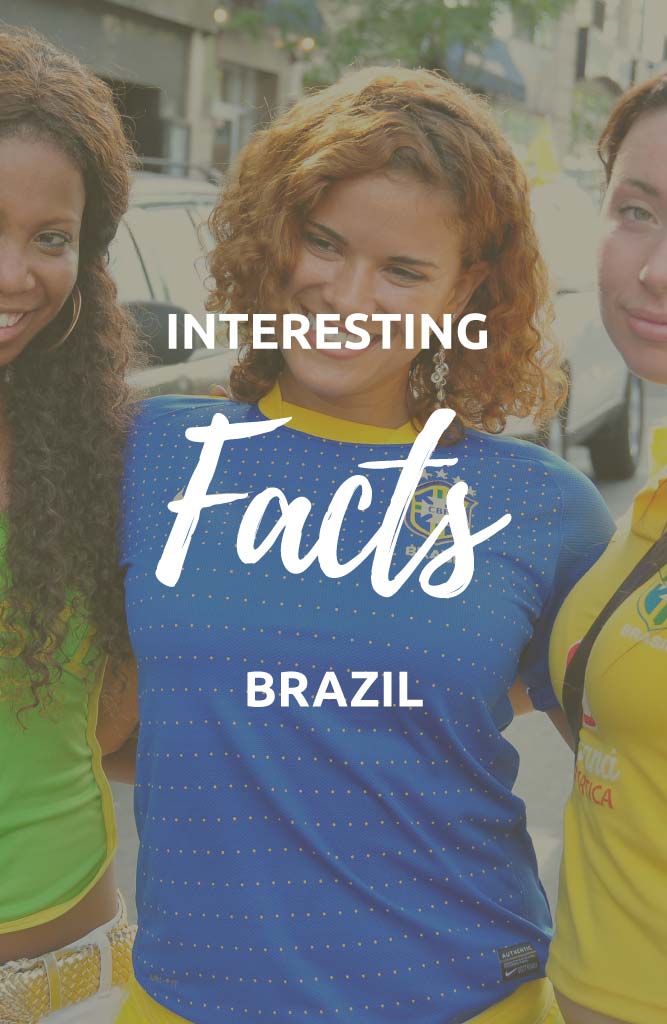 Did this help your search for interesting facts about Brazil?

This website uses cookies to improve your experience while you navigate through the website. Out of these, the cookies that are categorized as necessary are stored on your browser as they are essential for the working of basic functionalities of the website. We also use third-party cookies that help us analyze and understand how you use this website. These cookies will be stored in your browser only with your consent. You also have the option to opt-out of these cookies. But opting out of some of these cookies may affect your browsing experience.
Necessary Always Enabled
Necessary cookies are absolutely essential for the website to function properly. This category only includes cookies that ensures basic functionalities and security features of the website. These cookies do not store any personal information.
Non-necessary
Any cookies that may not be particularly necessary for the website to function and is used specifically to collect user personal data via analytics, ads, other embedded contents are termed as non-necessary cookies. It is mandatory to procure user consent prior to running these cookies on your website.
SAVE & ACCEPT
119 shares