You are here: Home / Latin Culture / Day of the Dead vs Halloween

Comparing Day of the Dead vs Halloween, what are the differences?

Halloween and Day of the Dead are different in many ways but slightly similar in others.

Day of the Dead vs Halloween

This article will give you the lowdown as to why they are different, where they originate from and how you can celebrate them.

Maybe you love both of these holidays, but it sort of makes your blood boil when someone calls Day of the Dead ‘Mexican Halloween.’

It’s ironic in the naming since Day of the Dead is effectively the complete opposite of Halloween. Let’s look at why:

Day of the dead vs Halloween Dates

Whereas Halloween is seen as a single night involving gothic symbols and playful ‘shocking’ antics especially designed to spook you.

Day of the Dead festivities unfold over two days – November 1 and 2, the same as All Saints Day and All Souls Day in Christianity.

Halloween always falls on the night of the 31st of October since it is the day before All Saints day.

Sure, the theme is death with both of these emblematic holidays, but the point is to demonstrate love and respect for deceased family members.

Halloween’s purpose is to scare away the evil spirits for the following day’s celebration. Day of the Dead is when good spirits, the spirits of deceased family or friends, are welcomed.

Day of the Dead Facts

Take note of these facts about Day of the Dead to get an overview:

Take note of these facts about Halloween to get an overview:

Where Did Day Of The Dead Originate?

The roots of the Day of the Dead go back some 3,000 years, to the rituals honoring the dead in pre-Columbian Mesoamerica.

It is celebrated in contemporary Mexico and among those of Mexican heritage in the United States and around the world.

The Aztecs and other Nahua people living in what is now central Mexico held a cyclical view of the universe and saw death as an integral, ever-present part of life.

There are many interesting books about Mexico that cover this aspect of Mexican culture.

The Aztecs in Mexico

You may be aware of the Aztecs, which were a famous denomination that shouldn’t be mixed up with the Mayans.

Upon dying, a person was believed to travel to Chicunamictlán, the Land of the Dead.

Perhaps reading up on local beliefs and some of the more popular Mexican traditions would be helpful in understanding.

Many view the Pixar movie Coco and don’t read any further.

Only after doing nine challenging levels, a journey of several years, could the person’s soul finally reach Mictlán, the final resting place.

In Nahua rituals honoring the dead (traditionally held in August), family members provided refreshments and tools to aid the deceased in this difficult journey.

This inspired the contemporary Day of the Dead practice in which people leave food or other offerings on their loved ones’ graves, or set them out on makeshift altars called ofrendas in their homes.

Day Of The Dead and Halloween Differences

How Is The Day Of The Dead Different From Halloween?

Day of the Dead is a gathering of family and friends and a celebration of life. It makes us embrace the memory of our ancestors and moves us to celebrate our own lives.

From an American perspective, it may look like a Pixar movie cultural parade with face paint and idols.

This is a surface-level assessment as to the true meaning!

Which in essence, could be similar to a Thanksgiving or Christmas-level of celebration.

Halloween nowadays is children playing fancy-dress and ceremonially going door to door and asking for candy. A level of mischief is involved but is mostly not tolerated by communities.

There is no common traditional celebration of Halloween, except maybe partaking in the viewing of a scary movie.

Day of the Dead Traditions

Learn some of the most popular traditions from Day of the Dead:

If you find yourself backpacking Mexico or even just visiting the country; you will notice that the skulls appear in many places including people’s homes and even in restaurants.

Day of the Dead vs Halloween

Hopefully, this has helped shape your idea of the differences and similarities between the day of the dead and Halloween.

Both should be enjoyed separately, but also can be celebrated by anyone who respects their heritage and traditions.

Day of the dead may seem like a culture shift from what you’re used to, but there are many that embrace the Mexican tradition around the world and even make it part of their own cultural cycle.

If you ever want to see the real deal, make sure you book your trip to a place such as Mexico City and see the ofrendas for yourself. 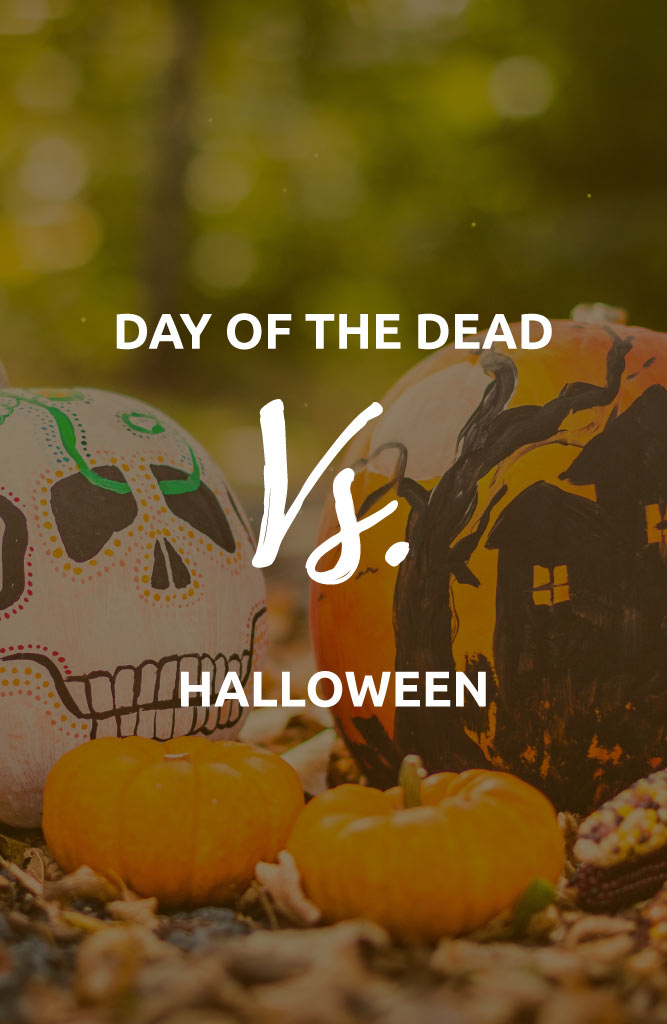 Did this help you understand more about Day of the Dead in Mexico?