You are here: Home / Learn Spanish / Bad Words in Spanish You Should Know

Are you looking to learn some bad words in Spanish?

Let’s be real; bad words are a vital part of what it means to master a second language. We can’t live without them even if we can’t say them in front of grandma, and that’s a fact.

That’s why today you’re going to learn 18 bad words in Spanish so you can add them to your vocabulary and use them when appropriate.

They could be used in a basic Spanish conversation if you wanted.

With fair warning, though! Some of these bad words will seem a bit odd and even funny, which is a big part of their beauty…

However, they’ll be super useful and will help you sound like a native.

We will go through their meaning, where they’re from, and how you can use them in a sentence.

Without further ado, let’s get into it!

Meaning in English: : Dumbass. It can be used to refer to someone who’s not very bright, but it can also mean “buddy” among friends. It all depends on the context! It’s a mild one so it’s used very frequently, especially among friends.

Meaning in English: Dumbass or idiot. While we’re at it, here’s another word for “dumbass”. It’s used when someone’s being either naive or stupid.

It’s not super derogatory and people use it freely, just don’t call your boss that.

Country: Any Spanish-speaking country makes us of this one!

It’s used very commonly whenever something unexpected and annoying or infuriating happens. Such as dropping your food or stubbing your little toe.

Meaning in English: Meaning in English: Wimp, coward, pussy. This bad word refers to someone who has no courage. It literally means “shitter”, which an observation on babies who are always dirtying their diapers. A popular word with Latin American Spanish speakers from all over.

People use it to refer to someone they don’t like at all, so it’s often an insult, but it can also be used playfully among friends.

Meaning in English: It literally translates to cocksucker. It’s derogatory and it’s often used as an insult to speak of someone who’s unbearable, but it can also be used playfully and even as a salutation among friends.

Meaning in English: Dick or prick. It’s a vulgar slang that refers to male genitals and it’s used to refer to someone who’s being a dick or an asshole.

Meaning in English: Sissy. It’s used to refer to someone who’s acting like a sissy or who’s being dumb.

It’s also used among friends the same way we say “dude”. Lastly, it’s used to refer to gay men but it’s derogatory, so keep that in mind.

Read more on the meaning of Marica to learn more about it’s use.

Sorry! It also refers to someone who’s lame and is always feeling sorry for themselves.

Meaning in English: Fuck off, fuck you, or go fuck yourself. It literally translates to “go take a shit” and it’s a way of saying “get out of my face”.

It’s often used when someone makes you angry or is wasting your time. It can also be used among friends in a joking manner.

Country: Used by all Spanish-speaking people.

Meaning in English: Bitch, slut. This is a multi-dimensional bad word and it can be used as an insult or jokingly among friends.

Country: Used by all Spanish-speaking people.

Meaning in English: Son of a bitch. This one is common and it can be used as an exclamation or as an insult to someone directly. It can also be used playfully among friends.

Meaning in English: Asshole. It literally translates to “miscarried”. It’s used to refer to someone who is the biggest asshole in the world to you.

It defines the kind of person who doesn’t care about anything or anyone and has no consideration for people’s feelings.

It’s not a nice word and it’s not something people usually say jokingly, though it can happen among friends. Most of the time it’s serious.

Calling someone a puto means you don’t like them at all. It can also be used playfully among friends, but mostly it’s a fighting word.

Country: Chile. They say it a lot!

Meaning in English: Jerk. It literally translates to “fucked in the ass” and it’s used when someone is being a jerk.

However, they also use it as “dude” among dear friends. Oh, Spanish bad words… They go by a different set of rules!

Most commonly, the word Verga in Spanish is used when something surprising happens in phrases like “¡A la verga!” meaning “Oh my God!”.

Meaning in English: Despicable, gross, asshole. It literally translates to “gonorrhea”, so it’s not a nice word.

It’s used to refer to someone who’s very disliked and it’s used to describe a bad situation as well.

I have written these to support my post on tips for learning Spanish faster to give you a head start on your Spanish learning journey.

Bad words are fun, they are colorful, to say the least, and they are a very important part of learning a new language.

As such, it’s no wonder people are so interested in learning them and native speakers are never shy about sharing their favorite bad words.

Today, I’ve put together a varied list of bad words in Spanish so your knowledge of the Spanish language can be enriched.

Some will be more memorable than others, but I’m sure you’ll find a use for some of them. Just make sure you’re not inappropriate!

There’s a time and place for bad words, so use them wisely.

If you want to learn more Spanish words see some of my favorite books for learning Spanish that you can find online. 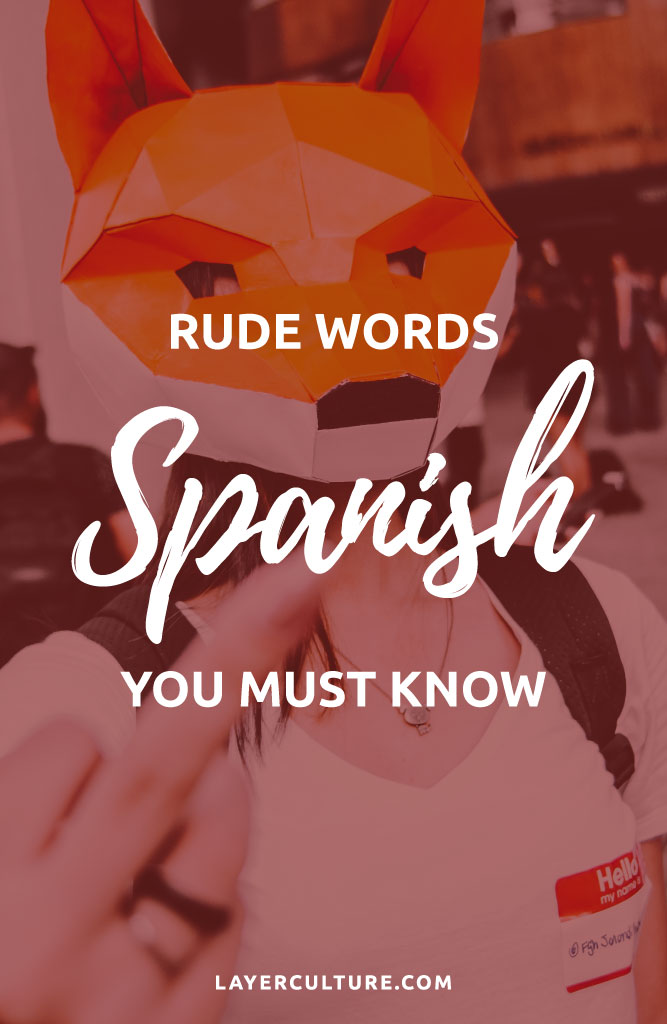 Did this help your search for some bad words in Spanish?

This website uses cookies to improve your experience while you navigate through the website. Out of these, the cookies that are categorized as necessary are stored on your browser as they are essential for the working of basic functionalities of the website. We also use third-party cookies that help us analyze and understand how you use this website. These cookies will be stored in your browser only with your consent. You also have the option to opt-out of these cookies. But opting out of some of these cookies may affect your browsing experience.
Necessary Always Enabled
Necessary cookies are absolutely essential for the website to function properly. This category only includes cookies that ensures basic functionalities and security features of the website. These cookies do not store any personal information.
Non-necessary
Any cookies that may not be particularly necessary for the website to function and is used specifically to collect user personal data via analytics, ads, other embedded contents are termed as non-necessary cookies. It is mandatory to procure user consent prior to running these cookies on your website.
SAVE & ACCEPT
5 shares